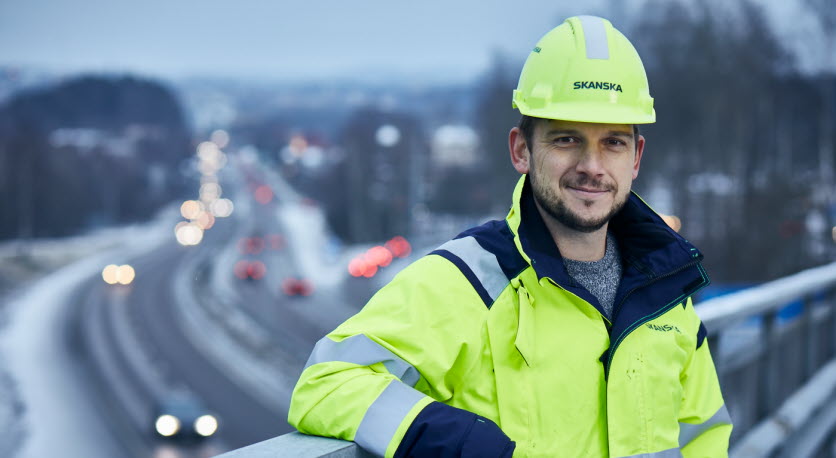 Combining a polymer-modified emulsion with two aggregate fractions gives you an especially durable surface. This was one of the main reasons why the contractor Skanska and the Swedish Transport Administration chose to use this technique on a road project in northern Sweden.

In a beautiful natural setting by the Indalsälven river, highway 87 passes the small town of Stugun. Because of intense rutting, the Swedish Transport Administration decided in 2018 to resurface the entire 50 km section from the region’s principal city of Östersund to Stugun using conventional asphalt.

It emerged that a couple of sections, covering around 15 km in total, were structurally sound and exhibited minimal deformation, which made the sections suitable for surface dressing. This also provided a good reference for comparisons with the conventional surface.

Surface dressing is a cost effective surfacing method used to extend the life of old asphalt with less environmental impact compared to conventional asphalt because of a lower application temperature with relatively little material consumption.

These types of methods, common in countries such as the UK, has been broadened in Sweden thanks to successful developments in polymer-modified emulsions and application techniques. This is the case for the method known as rackedin surface dressing. A Swedish adaptation of this technique was chosen by Skanska for highway 87 near Stugun. The work was carried out over three days monthend June-July 2018.

“Like many others in the industry, we’re striving to drive development forward with more hard-wearing surfaces at a lower cost and with less environmental impact. Racked-in is a good example of this,” says Erik Hassellund, Production Manager at Skanska Industrial Solutions AB.

The racked-in technique uses a polymermodified emulsion. The technique involves combining two aggregate sizes applied one after the other to form a mosaic of interlocked material. The emulsion is applied first, followed by the larger stone at a rate which allows sufficient room for the smaller stone which is applied in a second step to lock the larger stone in place.

Nymuls SD 105 was used in Stugun. This is a polymer-modified bitumen emulsion consisting of a polymer-modified binder with a high softening point (> 55 °C), good cohesion and excellent elasticity. This ensures that the binder is strong and that the adhesion between binder and aggregates is excellent. Thanks to the durable binder in combination with the mosaic the risk of aggregate loss is reduced and as a result the life-time of the surface is prolonged. The racked-in process can withstand higher traffic intensity compared to conventional single dressings and the polymer-modified binder makes the surface less sensitive to high temperatures.

Facts and FiguresIn a conventional surface dressing, a standard non-modified emulsion is used as a binder. It takes anything from a few to 24 hours to break and gain strength, depending on the weather conditions. A racked-in surface dressing using a polymermodified emulsion breaks and develops strength much quicker. The polymermodification also makes it possible to use less binder (approx. 2.0 kg/m2 compared with 2.3-2.5 kg/m2).For the first layer of aggregate, Skanska chose a fraction of 11-16 mm followed by an application with a 4-8 mm aggregate. Both fractions consisted of a hard aggregate – porphyry, which in combination with the larger size of aggregates will result in a more durable surface which is particularly important where studded tyres are common.

“Once the aggregate is in place, we operate dual pneumatic rollers that are in motion all the time. The more compaction the better, as that also accelerates the breaking of the emulsion,” confirms Erik Hassellund.

The whole process is completed with the new surface being swept to remove excess aggregates, the first mild sweep occurs as soon as it is seen that the emulsion has gained sufficient strength. The second cleaning is more thorough and takes place the next day, followed by a third one after another day or so.

Erik Hassellund emphasises that Skanska is positive about racked-in as a way of driving the development of surface dressings.

“We recommend racked-in on roads with an average to high AADT when a regular surface dressing is not always enough. There is, however, a requirement that the road has a stable foundation and is fairly even. With the right conditions, racked-in as a wearing course is more effective than conventional asphalt, both financially and from a sustainability and environmental perspective.”