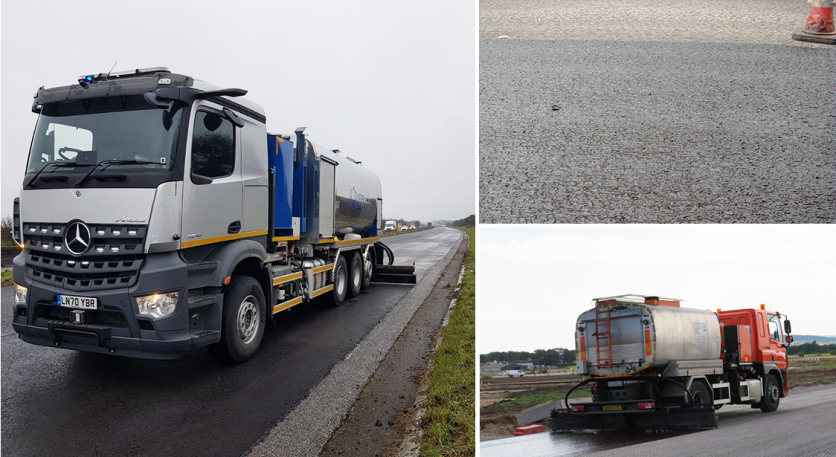 The importance of interlayer bond coat application during pavement construction

With our collective duty to ensure sustainable and environmentally responsible solutions, it is more important than ever that the road construction industry strives to get things right first time and build structures to last. That implies new structures, as well as maintenance interventions, must be effectively designed and the installation must truly reflect that design.

All current design protocols make the assumption that the full road structure acts as a single unit i.e., all the individual layers are bonded together, the so-called monolithic structure. If there is a weakness in any of these interlayer bonds, the design assumptions of the way the pavement dissipate the stresses are no longer viable.

Dr Stephen Tweed, Pavement Engineer in the Department for Infrastructure (DfI) Roads from Northern Ireland states the following “In recognition of the importance on interlayer bonding within pavement structures, the application of bond coat in conjunction with each bituminous layer installed is a current requirement within NI road surfacing contracts. Effective bonding between pavement layers is regarded as a key element in providing more durable, longer lasting assets with lower maintenance requirements, reducing the risk of premature failure resulting from layer delamination or water ingress into the pavement structure. The use of high-quality bond coat, between each pavement layer, is considered a fundamental requirement for the delivery of more sustainable pavements with increased service life and whole life value.”

It is important therefore, to clarify exactly what we mean by interlayer bonding. Essentially, we are talking about a three-dimensional bonding that stops independent layer movement, including: - pushing of the upper layer over the lower layer; slippage of the layers over each other; shape distortion of the upper layer compared to the lower layer. In a typical traffic loading situation, the key forces imparted to the interlayer would be firstly a horizontal shear forces directly under the point of loading and secondly an area of tension, in a circumference slightly further out from point of loading. This is a result of the flexing of the upper layer under trafficking (see Fig 1). The former force is exacerbated when the section of pavement is on an incline or it is in a braking or accelerating area. The latter force is a result of the flexible pavement bending under direct force and lifting just away from this (see Fig 1) This is why the quality of bonding is critical, to ensure these forces do not negatively contribute to the performance of the flexible pavement.

The actual quantification of the achieved bond has always proven difficult. In the UK, the established protocol involves a torque bond test, whereby a circular core is cut, a torque meter is affixed to the surface and the surface is moved through 180°. The level of torque is a measure of the bond strength. There is no doubt that the scale of the measure will be influenced by the texture of each surface i.e., the degree of aggregate-to-aggregate interlock or indeed the inter aggregate friction occurring between the layers. Whilst these forces contribute to the overall “torque bond figure” they would in no way provide adequate bond in themselves to stop the interlayer actions discussed above.

In 2010 Sutano Muslich carried out a thesis investigating the assessment of bond between asphalt layers. In his discussion, he laid out the reasons why this was so important. Around the world there have been investigations into early life failure of pavements, where the conclusion has been failure of the interlayer bonding. He cites the work completed by Peattie in 1980, where a significant number of bond failures were identified in new constructions through the 1970’s resulting in premature failure. He also cites other many similar examples, one particular example investigated by Hakim in 2002, where debonding between base layers was identified by much lower-than-expected stiffness figures on a Falling Weight Deflectometer (FWD) test, resulting in a low residual life prediction for the pavement.

It is widely known and accepted that Bond Coats are a key component in the construction and maintenance of highway pavements. The application of bond coats provides secured structural binding of the pavement layers and prevents the ingress of water into the lower layers of construction. With the pavement acting as a solid singular structure the load stresses are more evenly distributed and by waterproofing the structure bond coats help prevent the damage known to occur through the ingress of water into the lower layers. The outcome is a more durable and cost-effective pavement. This short-animated video highlights the benefits of the application of Bond Coats

Stuart Evans, Pavement Manager, from the Department for Economy and Infrastructure for the Welsh Government recognises the potential failure modes associated with poor interlayer bonding. He states.

“Full bonding coverage of surfaces between interlayers has been a critical requirement in the drive to improve the quality of Welsh Government surfacing works. Recurring issues such as de-bonding, joint failure, water ingress and the rapid deterioration of mats in winter months are all symptomatic of insufficient bond coat application. Increasing rainfall levels and temperature variability are challenges we face over future years - desirable design life can only be attained by good quality control and thorough bond coat application”.

Frequently, the symptoms of poor bonding between the binder course and the surfacing course can be alligator cracking; more often associated with fatigue issues. However, this type of symptom can occur relatively early in the life of the surfacing; a phenomenon not expected with fatigue. The reason for this was well defined by researchers at the National Centre for Asphalt Technology (NCAT) in USA in 2015.

This view was further supported by Roffe and Chaignon in their paper for the 2002 International conference in Greece. They were looking at characterisation tests for bond coats and reported that up to a 60% loss of pavement life could be expected where there was no interlayer bonding. Other research has provided similar loss of design life where there is inadequate bonding.

As previously mentioned, there were a significant number of early failures on the UK road network towards the end of the last century, attributed to poor interlayer bonding. Without doubt this brought about a change in view from the specifying authorities and the increased specification of this interlayer bonding. Indeed, the increasing prevalence of thinner layers with the introduction of clause 942 thin surfacing systems; which are designed as less dense mixtures; meant the requirement of good bonding was even more critical. Many years ago, it could be said that the thicker layers and the particularly dense, binder rich surfaces such as hot rolled asphalt were more forgiving. These material types ensured the stress was spread through the thicker layers and there was potentially more available binder in the matrix to form this bond at application.

So, there is no doubt that a good quality bond coat, incorporating a highly cohesive binder, at each and every layer interface, contributes significantly to the durability of modern pavements. Indeed, without these bond coats we are very likely to see increasing early failure on our network and a diminishing effectiveness of our asset management. The inconsistency of bond quality across a pavement can often be seen in thin surface course systems in small areas which have plated off the surface.

The application must be well controlled (too little will not provide sufficient “free binder” to bond and too heavy an application can result in a slip plane being formed). However, it must also be stated that the modern modified, highly cohesive bond coats reduce the risk of slip planes significantly. Furthermore, the applied bond coat must remain in place during the application of the upper layer. We do not want to see the free binder on the wheels of the pavers and site equipment. For that reason, low surface tack bond coats provide a greater protection against this risk.

In recent years, the UK has moved to a standard specification on bond coats rather than tack coats on all its highway infrastructure. Essentially this means the bonding layer contains a polymer modification to enhance the quality of the bond between the layers.

Additional, to the actual bond formation, the bond coat plays a critical role in protecting the lower layers from ingress of water. Again, this role is accentuated when considering a thin surface course system against that of the traditional denser, thicker layers such as hot rolled asphalt. This role of the bond coat must also not be underestimated. Keeping moisture out of the structural layers of the road is fundamental to durability.

It is incumbent on the whole supply chain to understand the criticality that the interlayer bonding has on durability of Britain’s road network. Alan Ferguson, former President of the Institute of Asphalt Technology and currently Materials Advisor for Asset Management of Roads in Transport Scotland says “the proper application of bond coat between all asphalt layers is vital to maximise the life of our asset.

Indeed, it is my view that bonding and sealing all asphalt layers combined with the correct level of compaction results in a structural layer that can significantly exceed design life. “

Arash Khojinian, Head of Pavements for Highways England, says: “Increasing the durability of the pavements on England’s strategic road network is vital. Properly bonded, well-designed asphalt layers are key to building longer-lasting pavements. Not only does the bond coat create a single uniform structure of the pavement, but it plays a critical role in protecting the lower layers from ingress of water. Correct specification and application of bond coats is essential if we want to see long-term improvement in the quality of England’s motorways and major roads”.

In conclusion, there are many examples around the world of premature failure of asphalt pavements, way before the design life; that has been put down to poor interlayer bonding. The thinner layers incorporated in modern flexible pavement designs at every level, depend absolutely on good interlayer bonding for their success. Furthermore, the bond coat plays a critical role keeping moisture out of the lower structural layers. In order to ensure our asset management is successful, we must minimise the environmental footprint, optimise the economics and employ good management of bond coats within well designed pavement structures.

Hakim BA (2002) The importance of good bond between bituminous layers. Proceedings of the 9th International Conference on Asphalt Pavements. Copenhagen. August: paper No1: 5-3

Kuennen T (2016) A Tack for the Battle, Roads and Bridges, The Industry resource for the road and bridge construction market.

Peattie KR (1980) The incidence and investigation of slippage failures. The performance of Rolled Asphalt Road Surfacings. The Institute of Civil Engineers, London. 3 – 15

Reproduced with permission from Highways Magazine and Quarry Managment. 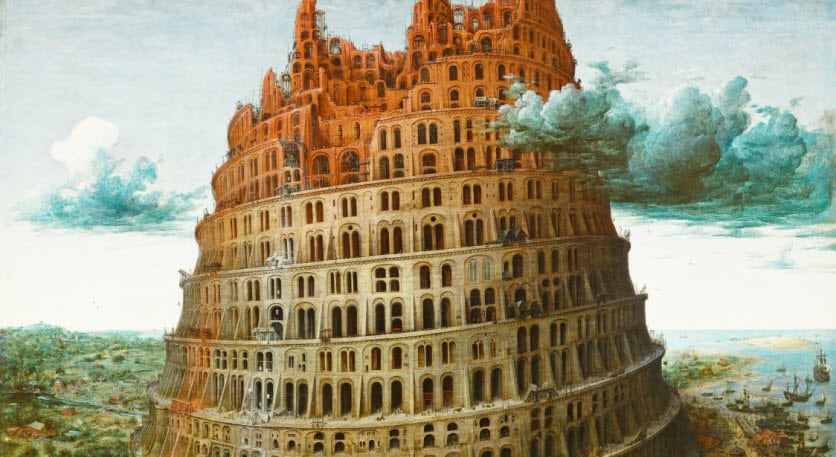 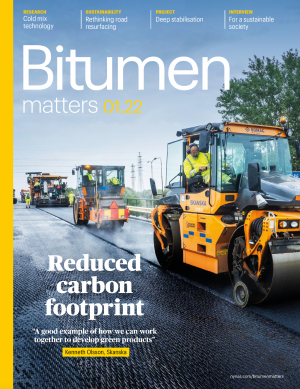