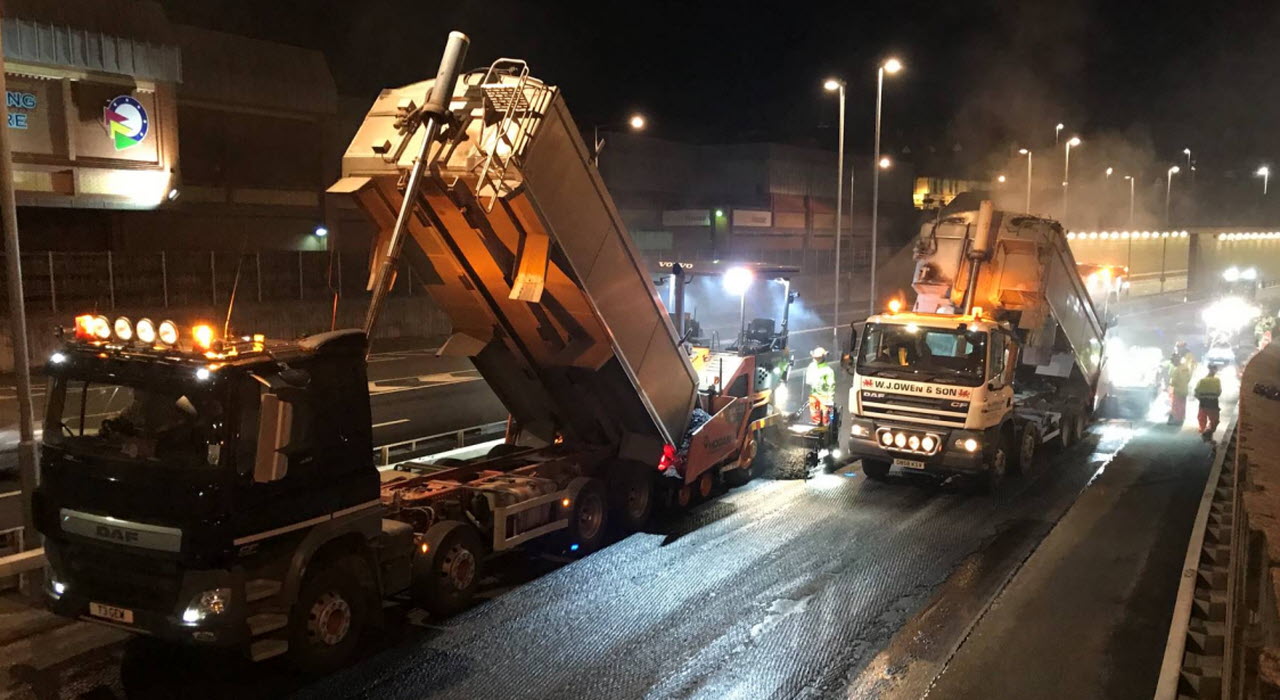 Rapidly deteriorating roads became a wake-up call for the government and set in motion a process that would eventually result in the new specification. Thin surfacing was heavily relied upon up to that point, and was found to be inadequate, providing an average service life of no more than seven years.

“We realised that we had to solve the thin surfacing conundrum, in order to achieve value for money for the taxpayer,” says Neil Bromham.

To remedy its deteriorating motorway and trunk road network, the Welsh Government (WG) were determined to find a surfacing solution offering increased durability, decreased routine maintenance, and lower whole life costs. An inspection panel compiled an assessment report and in 2014 a surfacing forum was created, seeking input from local contractors, suppliers, and other stakeholders.

“We took our time to investigate the problems thoroughly and tried to gather as much information as possible from as many sources as possible,” explains Neil Bromham.

A lot of invaluable advice and experience was collected from colleagues across the UK and Europe. Particularly where stone mastic asphalt (SMA) had been used with good results. Following in their footsteps, Neil Bromham and his team were able to adapt procedures to suit the specific circumstances in Wales.

With a diverse road network, which varies from motorways and dual carriageways to rural single carriageways with sharp bends and steep gradients, WG put a lot of emphasis on the surfacing providing good grip and an excellent ride quality. Other objectives included improving quality management systems and focus on an increased usage of sustainable local aggregates.

The Nypol family Nypol 103 and Nypol 83 belong to a family of Nynas binders aimed at reducing carbon by reinforcing asphalt durability, used successfully in Transport Scotlands TS2010 materials and now meet the specification for use in the new Wales SMA standard.

WG adopted Transport Scotland’s Type Approved Installation Trial (TAIT) process. First, all materials must be validated at an accredited materials testing laboratory. Asphalt mixing trials make up stage two, and in the final stage, the asphalt is then put to the test on the Strategic Road Network.

“The TAIT process means that we now know exactly what we will receive from our suppliers. All of our asphalt suppliers have been fantastic, and they fully support the direction taken,” says Neil Bromham.

It has been four years since the first WG SMA trial and according to Neil Bromham, “there is no surprise that the surface is still in excellent condition and will remain so for some time”. A clear testament to the success of efforts made. The fact that the number of reported potholes is reducing is another important indicator that the Welsh roads are heading in the right direction.

“After years of firefighting with our maintenance programmes, The WG Pavement Team are now on the verge of being proactive rather than reactive,” says Neil Bromham.