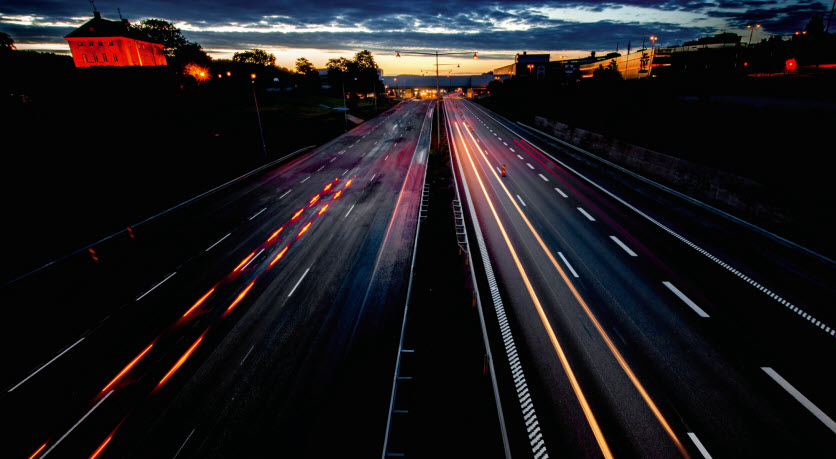 A total of around 20,000t of polymer modified asphalt was needed to complete the surfacing project on the E20. Photo: K-G Z Fougstedt

Those familiar with the E20 between the Jonsered intersection and the city limits of Gothenburg know that traffic levels can be high at times. An average of 50,000 vehicles use this section every day, 10% of them heavy goods vehicles.

Road users were aware that the carriageway surfacing had deteriorated. This was partly due to the surface course consisting of a porous asphalt which had an open structure. Such surfacing can age more quickly because of exposure to water and air.

This is precisely what had happened to a 5km section of E20 which consists principally of three lane highway. The Swedish Transport Administration sought a long term solution – it decided to mill away the whole surface course as well as some of the underlying layer and then reinstate the asphalt.

“We chose to repair the whole section with two new layers because so much original material had to be removed,” says project manager Fredd Larsson. A total review of the road’s geometry was conducted at the same time in order to correct transitions and adjust for subsidence.

To meet the tough demands for stability and fatigue resistance, Polymer modified binder (PMB) was used in both the 50mm binder layer and 30mm surface course. The choice of PMB – Nypol 67 and Nypol 73 from Nynas – means that the estimated lifespan has been increased in comparison to a conventional surfacing.

“The minimum requirement was that two lanes had to be laid in parallel. If three lanes could be done at the same time, a bonus was paid. This was the alternative chosen by Svevia, which employed a widened paver for two lanes and a supplementary paver operating in tandem for the third lane.”

This summer’s surfacing work on the E20 posed a number of challenges that put extra demands on both client and contractor.

The Swedish Transport Administration’s principal input involved planning the surfacing work overall and ensuring accurate removal of existing asphalt with precision controlled milling and total stations*. This helped precisely determine the gradient between lanes, an essential prerequisite for the use of a wide asphalt paver to lay two or more lanes simultaneously.

The main challenge for the contractor was to manage the logistics in terms of operatives, machines and the supply of asphalt.

“The outcomes of the project are unique and very positive. Svevia managed to surface three lines without joints, laying around 1500m per shift. The execution of the work was good and effective traffic management kept disruption to a minimum,” concludes Fredd Larsson.

* A computer generated model of the road was fed into the mechanical control equipment of the milling machine. By calculating the position of the machine using total stations, the milling depth could then be automatically adjusted according to the model. 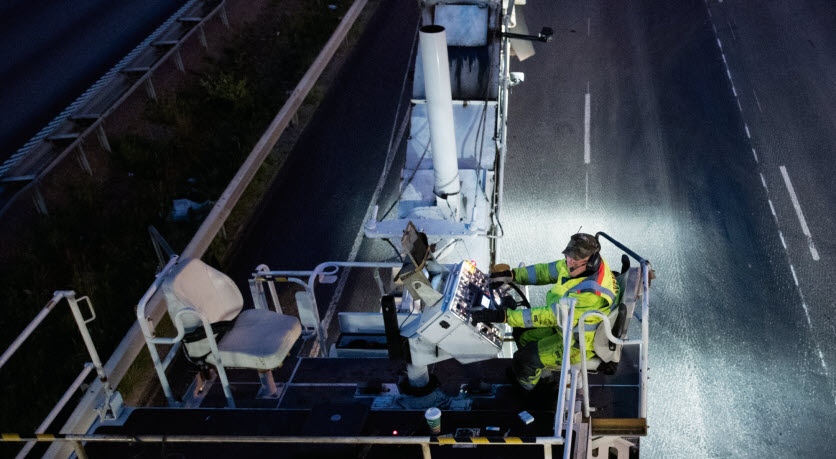