A1 motorway (Paris/Lille) between Carvin and lesquin 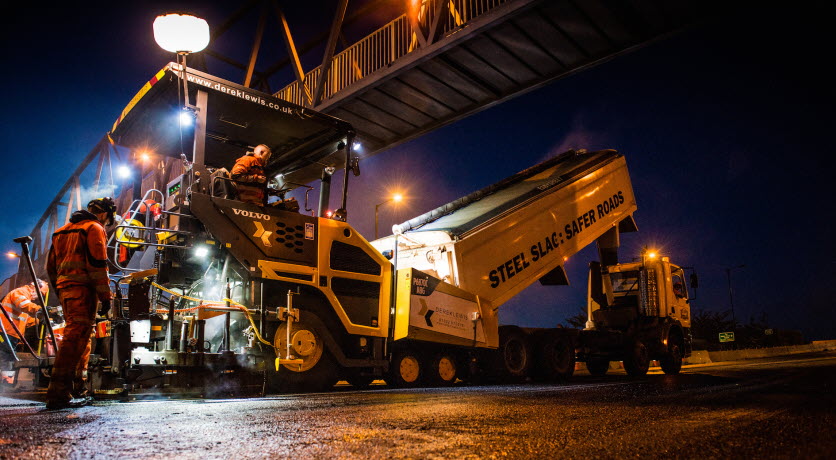 Renovation of A1 motorway pavement northbound between Carvin and Lesquin, in the direction of Paris to Lille, along an unfranchised section of the route. The A1 carriageways date from the 1950s, were widened in the 1970s, and have never before received any major structural maintenance, despite heavy traffic.

Construction of a new pavement structure dimensioned according to the density of traffic, consisting of a base layer in EME 0/14 plus a binder and temporary wearing course in BBSG 0/10.

The highway was built originally as dual two lane but widened to dual three in the mid 1970s. It carries a heavy load made up of commuter, local, national and international traffic. Work to renovate the north bound carriageway involved crossovers at various points along the central reservation so that a 3 + 1/1 lane regime could be operated (ie three lanes maintained in the southbound direction Lille to Paris with two lanes kept open in the direction Paris to Lille). This required preparatory night work carried out in June and July.

Work on the carriageway itself was scheduled for August because traffic then is slightly lighter and of a different nature, and weather conditions are more favourable. A continuous round the clock operation was required to complete the work by the due date of the last weekend in August.

ETPN proposed at tender stage, as a variation, the recycling of some of the existing asphalt. A ‘recyclability’ study of this asphalt by the St Quentin Government Laboratory included core drillings and visual surveys to precisely establish the areas of homogeneous deposits favourable for recycling; which led to the laboratory recommending proceeding with selective milling and recycling. The top 30mm were reserved for recycling in the BBSG and the bottom 140mm for recycling in the EME.

The quality and performance of Nynas products for use with recycled asphalts combined with ETPN’s knowledge enabled the asphalts to be formulated at the first attempt. Despite the extra cost of ‘high end’ performance binders, Nynas Nypave FX 15 was preferred as it provided a greater certainty of conformity with the formulation study.

From the beginning, conformity was achieved and maintained thanks to the professionalism of the central Ciry-Salsogne laboratory of Eiffage Public Works, the support of Nynas and the know-how of the ETPN production teams supervised by Laurent Chivet.

A future contract in 2012 will enable the A1’s pavement in the southbound direction to be renovated and the final wearing course in BBTM to be laid in both directions.

Download this information on how Nynas Nypave FX 15 was used at A1 Motorway between Carvin and Lesquin, as pdf.

SITE NAME A1 Motorway (Paris/Lille) between Carvin and Lesquin