A36 - Beaune to Besançon

The recycling approach is gaining value in light of corporate commitments to sustainable development. A professional goal has been set to recycle 60% of bituminous materials by 2012. Consideration was given to using recycled materials during the reinstatement of carriageways of the A36 autoroute in France. 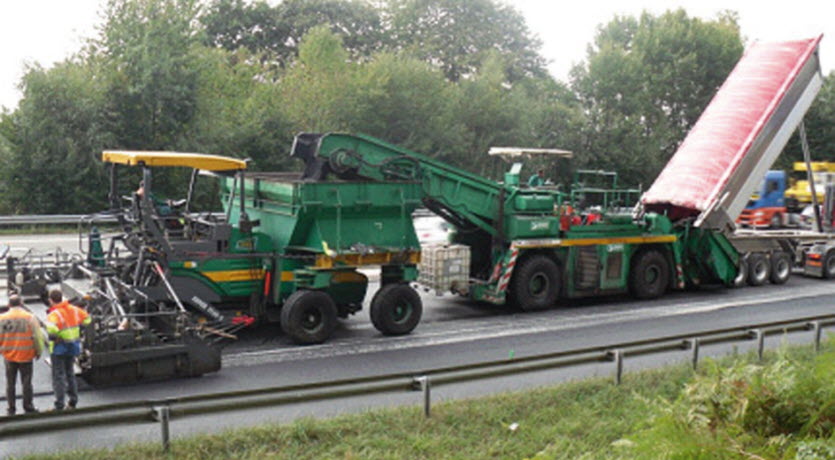 Recycling of high modulus asphalt is nothing new. But the recycling approach is gaining value in light of corporate commitments to sustainable development. A professional goal has been set to recycle 60% of bituminous materials by 2012. Consideration was given to using recycled materials during the reinstatement of carriageways of the A36 autoroute in France.

It was decided to recycle millings from very thin bituminous concrete (VTBC) into the A36 autoroute's new road surfacing - with 15% of aggregates from the old road surface being incorporated in the new high modulus asphalt.

Work began by milling a very thin layer from the existing bituminous concrete – of no more than 40mm – across all running lanes of the motorway, an area of 150,000m2. The hard shoulder was not involved in the refurbishment. A 120,000m2 area of the motorway then received another pass of the milling machine, to remove a further 80mm from the road.

A geotextile membrane, impregnated with Fibertex bituminous emulsion, was then placed across the 'graves cement' base of the near side lane to inhibit cracking. The overtaking lane was treated by spreading an adhesive layer of Colnet fast breaking bituminous elastomer emulsion. Asphalt material was then laid on the road, which was comprised of a 0/14 HMBC with a Nynas 20/30 bitumen base. The HMBC included 15% aggregate planings taken from the old road surface.

Laboratories of SCREG Est carried out testing. During the tests, technicians took advantage of the hardening that occurs in the ageing process of the bitumen present in the millings to determine whether it would be possible to use a softer grade of input bitumen. The softer grade of bitumen, 20/30, was preferred to the 10/20 grade normally used to produce high modulus asphalt. The new recycled asphalt easily passed the 12 GPa limit tests, meeting the required standards for HMBC.

This approach enabled the reinstatement works to continue without 10/20 bitumen, a grade that could have been difficult to obtain as it is so much in demand. It also saved 180t of 20/30 bitumen. The success of the project could strengthen the expected trend towards greater use of milled material in road surfaces, paving the way for other recycling projects using even higher volumes. The overall objective is to economise on the use of non renewable resources.

Download this information on how Nynas 20/30 was used at A36 - Beaune to Besançon, as pdf.

SITE NAME A36 - Besançon To Beaune