A new kind of bitumen binder is making it possible to reduce the mixing temperature of asphalt without affecting the quality of the finished product. 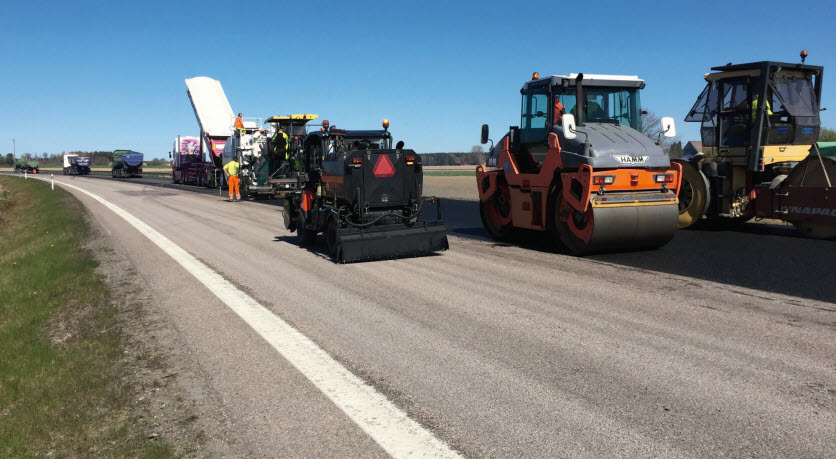 The condition of road 184 between Lidköping and Skara in the south west of Sweden has not met road users’ expectations in recent years. Plans to convert the route to a 2 + 1 configuration meant that carriageway deficiencies were not addressed. Then the route improvement project was postponed and the Swedish Transport Administration decided to resurface the road instead.

The section in question – about 17kms long – is a comparatively busy one, carrying an average of 7000 vehicles per day including a lot of heavy goods vehicles. A low temperature asphalt (LTA) was chosen for the resurfacing, to reduce both energy consumption and carbon dioxide emissions.

LTA makes it possible to reduce the mixing temperature of asphalt by up to 30oC. There has been disquiet in the past that LTA is not sufficiently durable for relatively busy roads. But thanks to recent technical advances, it is now possible to achieve both durability plus the desired void content and adhesion.

One example of innovation is a bitumen binder from Nynas known as Nytherm which – as well as being ideal for LTA mixtures –  allows lower compaction temperatures and increased moisture resistance, all without affecting the quality of the finished asphalt.

“This was the first time we’d used this product and as always when trying something new we were slightly concerned about how it would turn out. But the outcome was really good, with a void content of 2-3% and voids well and evenly distributed,” says Works Manager at contractor Sandahls Grus & Asfalt, Steve Tingström.

Road 184’s old surface was effectively completely worn out so the contractor had to start by milling the whole section to make it flat. Steve Tingström and his colleagues chose to widen the pavers so that they could lay 6.5m at a time and thereby avoid joints.

“We also operated in tandem at exits and entries. This meant that there was only one joint in the centre of the 13m wide road,” he explains.

The new surface course is 40mm thick. The laying rate equated to 100kgs of asphalt per square metre, amounting to a total volume of 22,000t.

Nytherm is produced and delivered by Nynas. This means that the contractor avoids having to handle admixtures or make process changes at the asphalt plant.

“The only adaptation at our plant was that we ran all the LTA in one single batch. This meant we avoided the risk of temperature increases in connection with changing asphalt mixtures,” concludes Steve Tingström.