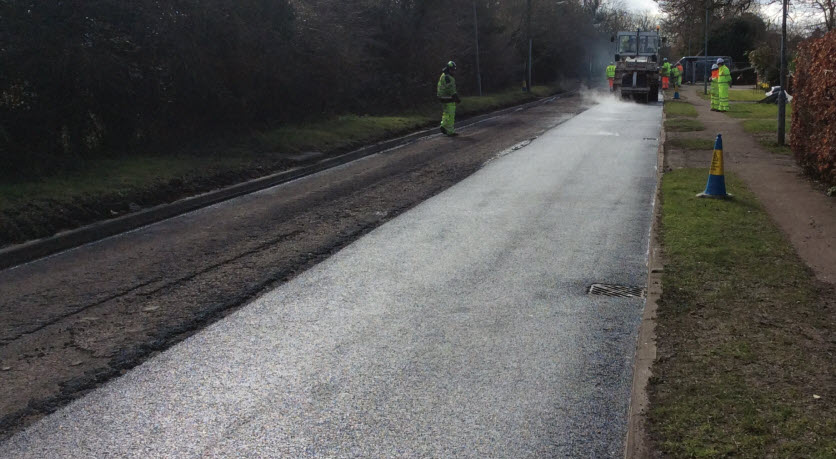 “The running surface is excellent, the more so when you consider the very fast road opening that was achieved after every tranche of work.”

This is an excerpt from Quarry Management, January 2017.

Cost savings come into the equation of course, when deciding whether to use low temperature asphalt (LTA), as do longer service life expectancy, a quick turn round of work and less disruption to motorists. Then there are the well charted environmental benefits which include less energy use, fewer emissions and safer working. What is there not to like about LTAs, you might ask? “Nothing,” confirms Cambridgeshire County Council’s Head of Highways Richard Lumley. Having gauged the benefits of LTA for himself after trials in his county, Lumley has become much less likely to specify hot mixtures without good reason to.

“It now seems to me that lower temperature mixes can be a viable and beneficial alternative to hot mix in most circumstances,” he says. “There were no negative signs,” he adds, referring to the trials of LTA which were carried out by Cambridge CC in partnership with its highway term maintenance contractor Skanska and asphalt supplier Aggregate Industries.

“I don’t see why hot materials need to be specified other than in extreme conditions. I can see LTAs becoming the default choice of Cambridgeshire when we specify asphalt for road maintenance in the county.”

Reduces the cost of traffic management

LTAs have been around in Britain for a considerable time but their uptake has been slow despite good environmental credentials – higher cost in comparison to hot mix has tended in the past to outweigh the green benefit in particular of reduced carbon impact.  But lately, as alluded to at the top of this article, there has been a growing appreciation of the extended service life and concomitant whole life cost savings of LTAs plus a range of distinct practical benefits.

It is now clear that some LTAs, mixed and placed at temperatures perhaps 30 oC to 40 oC less than hot mix, can be laid rapidly, compacted well and trafficked much more quickly than hot mixtures. This reduces the cost of traffic management, for instance, and also disruption to the travelling public. Road closure is minimised and diversions often avoided. Then there is the reduced oxidative hardening and bitumen ageing that is a characteristic of LTAs: there is an expectancy of longer pavement life when an LTA is used. The savings can add up for a county council under pressure to cut costs.

“The benefits are not to be sniffed at,” Richard Lumley says. “It was the potential savings that concentrated my mind on doing things differently. We have to look at ways to cut costs here and have the support of Council Members to explore new products and ways of working. Hence the trials of LTA.”

The trials that involved Aggregate Industries took place in March 2016 along Highfields Road in Caldecote, a village 10km west of Cambridge. Running through an urban area, the single carriageway road has numerous side roads and mini roundabouts and the work had to be done under off peak daytime lane closures – although access had to be provided at all times for live traffic. The laying of surfacing, 50 mm thick following the planing out of a similar depth of existing material, took place over five days. Daily productivity was affected by the laying logistics, not the material Lumley says.

He confirms that the material produced by Aggregate Industries – the company’s Superflex surface course which uses a purpose produced Nytherm binder from Nynas, see box –  went down well with good workability even at lower production and delivery temperatures. “The running surface is excellent, the more so when you consider the very fast road opening that was achieved after every tranche of work.”

Inspections of the LTA at Highfields Road are currently limited to visual inspection employing video surveying techniques although Lumley states that further investigation will take place if any visually identified issues  emerge. “So far there have been no issues,” he says. “The trials were based around the LTA version of the widely used HAPAS for surface course materials so we don’t expect to experience any material design related failure, particularly based on the testing that was carried out during construction.”

It could well become the new default material

Keeping a watch on performance will be the pavement forum held by Cambridgeshire County Council on a regular basis. The forum includes colleagues from Lumley’s department, Skanska, Atkins (which supplied specialist material and pavement design support to the trials) and supply chain representatives. “The forum is intended generally to improve the processes we use, to look at materials development and so on.”

Richard Lumley declares himself well satisfied with the Aggregate Industry trials. “I’m impressed by the contractor’s lower temperature material. Anything which saves us money has to be a good thing and this combined with less disruption when the asphalt is being put down plus the fact that when it’s down, it’s down for a good period of time makes LTA attractive to us. It’s more and more likely we’ll be specifying the material in the future. As I said, it could well become the new default material specified for highway maintenance.”

Cambridgeshire County Council’s Highfields Road, Caldecote trial of low temperature asphalt (LTA) took place in the spring of 2016 during wet and windy weather. The mixture trialled was Aggregate Industries’ proprietary asphalt surfacing Superflex, produced at the company’s Peterborough asphalt plant at between 30 oC and 40 oC below normal mixing temperature. Some 1100 tonnes of Superflex was laid 50 mm thick, over five days.

“The extended time period was because we had restricted access and had to keep open to traffic,” says AI’s National Technical Manager (Aggregates/Asphalt) Philip Sabin. “The ‘bitty’ nature of the project clearly demonstrated the advantage of lower temperature material in enabling fast road opening.”

AI’s Superflex contained a specially selected version of Nynas’ Nytherm PMB binder, a warm mix polymer modified bitumen. Nynas’ UK Technical Support Manager Dennis Day emphasises the point that the company’s Nytherm range offers clients other performance benefits in addition to reduction in energy use. He says: “The use of warm mix polymer modified bitumens such as Nytherm PMB is on the increase as it allows early opening to traffic and completion of contracts, clearly demonstrated by Aggregate Industries’ project in Cambridgeshire.” 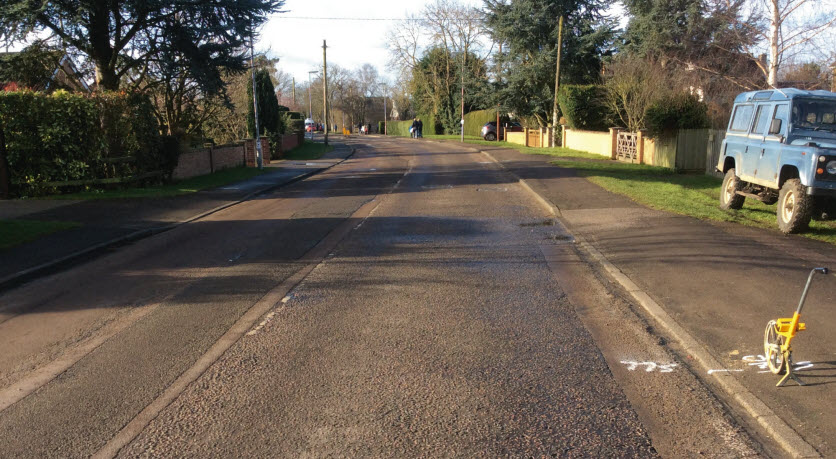 Highfields Road in Caldecote before laying of new surfacing.