The addition of Nygen 910 opens up the possibility of using higher proportions of recycled material in asphalt mixtures. 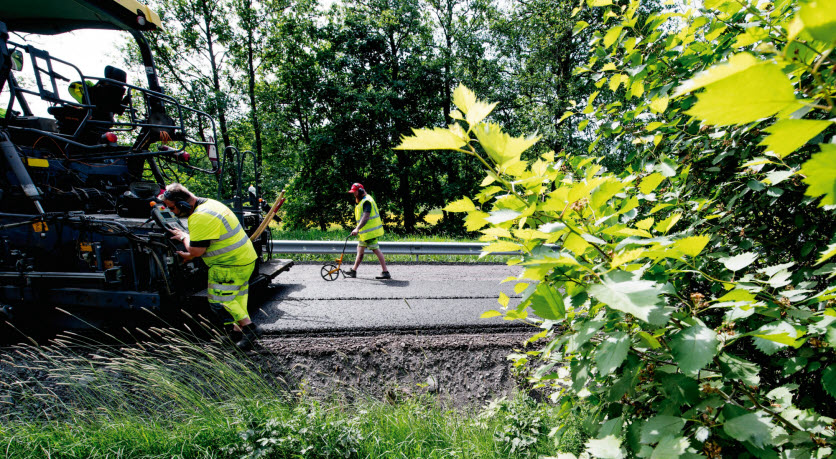 Nygen 910 from Nynas is used to soften old asphalt for recycling and enable it to regain most of the properties that it had lost through ageing. This means that asphalt producers can incorporate larger proportions of recycled asphalt into their mixtures without loss of quality.

“We tested Nygen 910 – among others – as a softening agent in a surfacing project for the Swedish Transport Administration on the island of Orust, north of Gothenburg,” says Production Manager of contractor Svevia, Henrik Jonsson. The project involved standard class roads with a width of six metres and an average traffic flow of 1500 vehicles per day.

Work started at the end of April 2016 with milling and the contract was completed by the middle of June. Some 6600t of aggregate was needed for the base course and 4000t for the surface course. According to the job specification, soft bitumen had to be used. Hardness was not to exceed V12000 (V = viscosity) and the viscosity change was not to double.

Why did you choose Nygen 910 for the project?

“The Swedish Transport Administration’s reinforcement specialist recommended that we should use an agent to soften the hardened binder in the asphalt arisings. Together with Nynas’ laboratory, we were then able to confirm the correct blend percentage to meet the client’s requirements for the change in viscosity from tank to laying on the road,” says Henrik Jonsson.

This was the first time that Nygen 910 has been added to an asphalt production process using a steam turbo unit. In a steam turbo unit, the aggregate is heated by spraying in overheated water vapour. The steam is then mixed with the binder, eliminating any risk of overheating the asphalt mixture.

He also states that Nygen 910 was added early on to the asphalt arisings, as at the time there was no ideal point for inserting the agent during the asphalt production process.

“The arisings were then stored for two weeks. We could use 50% recycled asphalt in the bound base course and 20% in the surface course. Now, looking back, we can confirm that we achieved an exceptionally workable asphalt when we used Nygen 910.”

There is no doubt that the procedure makes it possible to use a relatively high proportion of arisings in a recycled asphalt blend.

“The project on Orust was both an enjoyable and an exciting challenge for us. As well as making an impression in a new market, we were able to show that semi-hot production is best carried out with a steam turbo instead of in hot asphalt plants,” concludes Henrik Jonsson.