Improved maintenance methods mean that surface dressings can be a cost-efficient alternative on roads with relatively heavy traffic. One current example is Racked-In surface dressing. 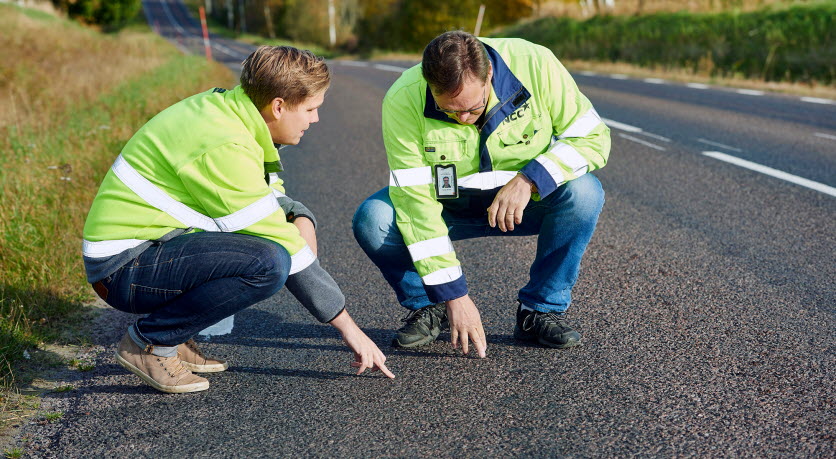 Johan Falk and Tomas Brodin agree that Racked-In can be a cost-efficient surface dressing measure even on relatively busy roads. Foto: Tommy Hvitfeldt

The Swedish Transport Administration will continue to both conduct new tests and evaluate sections already completed before the method becomes standard in the Swedish market.

“We have high hopes that this will be another alternative in the range of surface dressing techniques we use. Surface dressing has low CO2 emission and low energy consumption, which is just what is needed right now,” believes Johan Falk, Project Manager District South.

This summer the contracting company NCC, working on behalf of the Swedish Transport Administration, completed a Racked-In project on the 986 road to the east of Jönköping in Southern Sweden. Although it had been about ten years since the road was maintained, it still had good surface characteristics. But there were some cracks beginning to appear, and the binder had started to erode.

“We’d previously conducted tests with Racked-In and we wanted to see whether we could refine the concept by using alternative sized aggregate fractions. The 986 road was ideal, as it has a bit more traffic than is usual on surface dressed roads, as well as good basic conditions without deep rutting,” explains Johan Falk.

Tomas Brodin, Site Manager at NCC i Jönköping, says that they are working flat out to develop and test more durable surface dressings that produce a longer useful life and fewer loose chippings, as well as enabling faster sweeping and lower noise levels.

“Using Racked-In we can, depending on the weather, sweep after only three hours or so, compared with the usual 7-8 hours. It also uses less emulsion, around two kilos per square metre instead of almost 2.5 kilos for conventional surface dressing.”

Tomas Brodin believes that it should be possible to use Racked-In surface dressing on roads with up to 7,000 vehicles per day (AADT) compared with approx. 2,000 for a normal surface dressing.

On the 986 road we chose a combination of 8/11 mm and 2/5 mm. And if the substrate is good, as it was in this case, a Racked-In solution should be able to last a good ten years.”

Both client and contractor are very satisfied with the results.

“We achieved what we were looking for: a good aggregate mosaic and an emulsion that broke at just the right rate with good grab. This first winter will be critical following the initial rounds of winter treatment including snow ploughing, so we’ll not see the true result until the spring. But I’m very hopeful that we’ll have a surface dressing that will last for many years,” concludes Johan Falk.