Improved collaboration between suppliers, transport providers and asphalt plants is resulting in a further improvement in safety when loading and unloading bitumen. 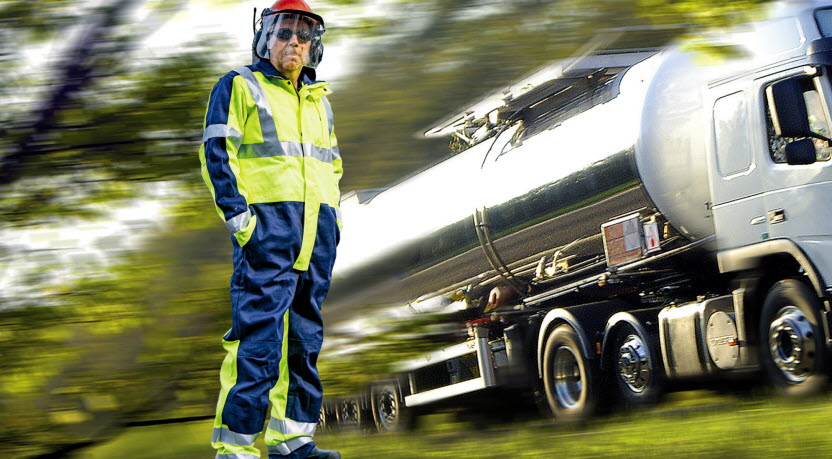 It is pleasing to report that significant investments have been made recently in terms of loading and unloading bitumen at both depots and asphalt plants.

“There are now radar gauges at many asphalt plants to check the levels in bitumen tanks and thus avoid over-filling. When we started transport operations 25 years ago we had to rely on yardsticks or floats hanging on wires,” says haulage company owner Magnus Bengtsson.

Bengtssons Åkeri is in Hyltebruk, a little to the north east of Halmstad in Sweden. As well as delivering biofuel to heating plants and industrial boilers, and taking care of winter road maintenance for municipalities and industry, they have specialised in the transport of emulsions and bitumen.

According to Magnus Bengtsson, one important step in improving safety is the transition from pressurised pipelines between road tanker and tank to stationary suction pumps, known as ground based pumps.

“By using air, which literally sucks the bitumen into the asphalt plant’s storage tanks, we eliminate the risk that bitumen at a temperature of 160 degrees is sprayed out if a hose were to split. If the unloading pump breaks, the worst thing that can happen is that a little bitumen will drip out.”

But a lot has happened at the bitumen depots too. For example, there are protective rails to prevent falls and drivers no longer need to stand on top of the tanker during loading.

“In the past we used to climb up small ladders on the side of the vehicle. Now the driver stands instead with protective gear behind plexiglass on a platform several metres from the tanker. And installing flow meters that monitor the capacity of each tanker means that they can’t be over-filled.”

When a new driver is hired at Bengtssons Åkeri, he or she has to undergo an introductory training programme. During the first few weeks they are also accompanied by an experienced driver at all times.

“Nynas also arranges drivers’ meetings at which we have in-depth discussions about safety. One new feature this year is that the asphalt plant conducts a safety review the first time a driver arrives with a bitumen delivery.”

So many things are now better, although this does not mean that things cannot be improved.

“There’s definitely been a positive development in the situation at the stationary asphalt plants. The deficiencies that still exist relate in the first instance to the mobile plants, including the emergency showers.”

And if we look into the future?
“There’s a risk that we build in a false sense of security and believe that everything will take care of itself. It’s a matter of not sitting back, but of staying aware of the risks and of course making sure that we maintain the investments made at asphalt plants and depots,” summarises Magnus Bengtsson.