During the past few years, metallocene polyolefin elastomers (mPO) have become significant market players and are growing continuously in several industrial segments. 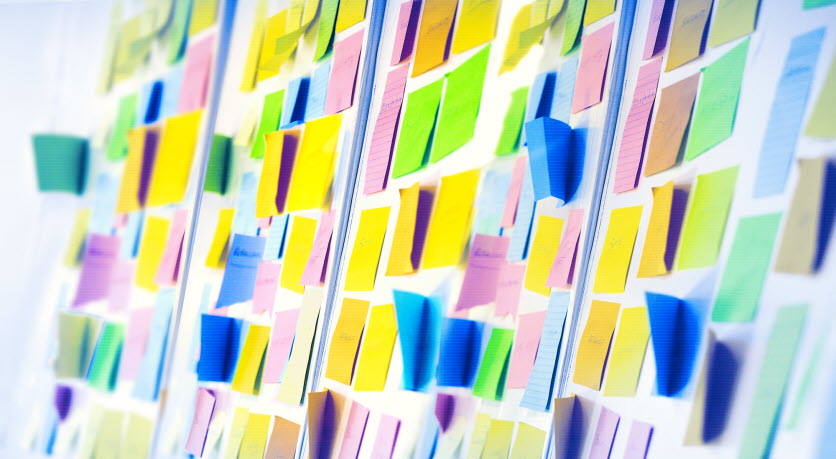 During the past few years, metallocene polyolefin elastomers (mPO) have become significant market players and are growing continuously in several industrial segments. Strong penetration can be observed in hot melt adhesives (HMA) where the dominant polymer is still styrene block copolymer (SBC). Due to the unique properties, versatile applicability and supply benefits polyolefin based alternatives are becoming increasingly favourable and have also started to replace SBCs in certain HMA applications. The estimated global demand for SBCs and polyolefins are expected to be equal by 2020.

Mineral oil is used as plasticiser in a variety of hot melt applications (e.g. tapes, labels, flooring, hygiene articles etc). The function of the plasticiser is to lower the melt viscosity, to adjust glass transition temperature and the end-use properties. Similarly to SBCs, mPOs are also high molecular weight compounds that require plasticiser to meet certain property requirements. Hence, it is of great importance to assess the compatibility and impact of mineral oils on the performance of mPO-based HMAs.

Since one of the biggest outlets for these adhesives is the hygiene industry – more specifically non-woven applications i.e. diapers and feminine care – the formulations were based on general construction adhesive recipes.

In order to limit the effect of different components, the formulations were kept simple and containing only the most essential ingredients (Table 1.) All samples were spray coated on PE non-woven substrates and the spray pattern was optimized. In order to evaluate the weight reduction possibility of the adhesive three different add-on levels were used; 2, 3 and 4 grams.

Tab. 1
Formulation of EO and PP based HMA

Figure 1 presents the melt viscosity results of both EO and PP based construction formulation. The measurements were carried out at 165°C. In EO based formulation no difference was observed between naphthenic and paraffinic plasticisers. In case of PP based samples naphthenics showed slightly higher viscosity. This is due to the higher polarity of naphthenic molecules. Another oil property that influences the melt viscosity is the viscosity index (VI) which is the measure of viscosity drop as a function of temperature. Typically naphthenic molecules have lower VI value compared to paraffinics. This means that the viscosity drop is bigger for naphthenics when the temperature is increased. Therefore, in the current case it means that if the temperature would be increased up to 180°C, the viscosity of both naphthenic and paraffinic would be equal or slightly lower for naphthenics. Melt viscosity is especially important for the application of the adhesive layer on the substrate. Choosing a mineral oil with a low VI (high viscosity drop) would ensure that the application temperature could be decreased. This has an impact on the manufacturing and processing efficiency as it would mean lower energy consumption due to the lower temperature. 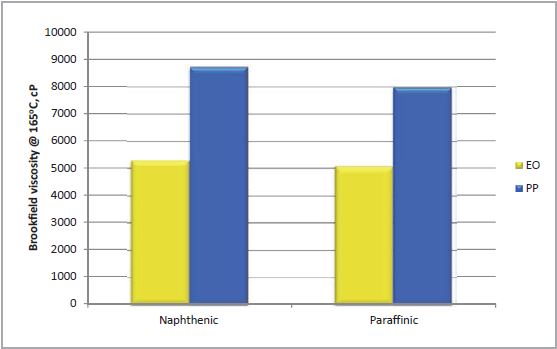 Performance has special importance within the service temperature range in case of diaper or other non-woven adhesives that come in contact with human body or used at elevated temperatures. Typically the peel properties such as peel strength decreases with the increasing temperature. On Figure 2 the peel strength values at 37°C are presented for both EO and PP based samples including the different add-on levels. It is clearly visible that in both polymers containing naphthenic oil the peel values are significantly higher at high add-on levels compared to paraffinics. By decreasing the weight of the adhesive on the substrate there is a trend of decreasing peel strength. This is expected as the adhesive layer between the substrates is getting thinner. If we compare the peel values of naphthenic and paraffinic formulations as a function of decreasing adhesive add-on levels it seems that the difference between the two types of mineral oil plasticisers is reduced. However, even at the lowest add-on level (2 grams) naphthenic plasticisers ensure significantly higher peel performance. 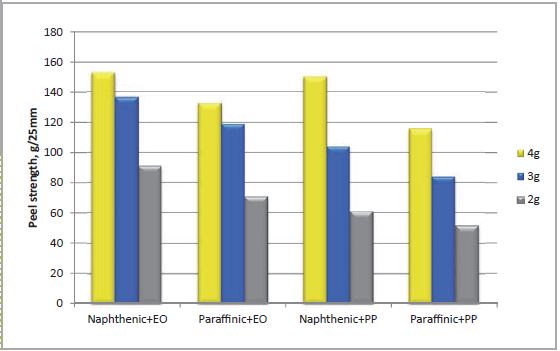 Fig. 2
Peel strength of EO and PP based HMA in case of decreasing add on levels

The shear performance plays higher role in case of tapes and labels, but it is certainly important for non-woven adhesives as well. In case of PP based formulations no difference was observed between naphthenic and paraffinic grades, which was expected (Figure 3). This property is mainly polymer and tackyfier dependent. Nevertheless, it seems that naphthenic oils can contribute to the shear performance in EO adhesives. It resulted in significantly higher SAFT value compared to the paraffinic sample. 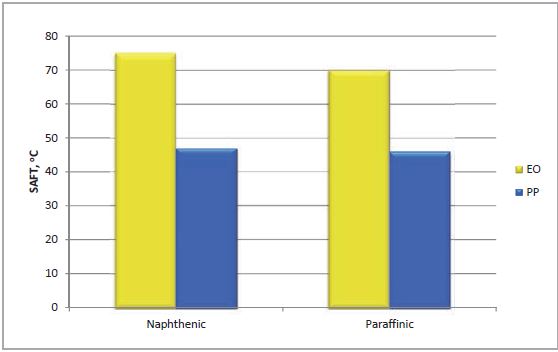 Fig. 3
Comparison of shear adhesion failure temperature of EO and PP based HMA

The viscoelastic behaviour and the rheology of the adhesive basically define the overall performance, manufacturing and processing conditions. Therefore, in-depth analysis of rheology curves can be a great tool in rapid formulation development and adjustment. Many different properties can be predicted from the rheology data (e.g. peel strength, creep, open time, viscosity, glass transition etc.).

By comparing the rheology curves of formulations containing naphthenic and paraffinic plasticisers significant differences were observed (Figure 4-5). Naphthenic oils contribute to higher storage and loss modulus, therefore higher peel values could be expected. This correlates well with the peel adhesion results. There is another significant difference in the tanδ peak compared to paraffinic formulations. The glass transition temperature (Tg) is shifted by approximately 5-10°C. This is due to the difference between naphthenic and paraffinic oils. Paraffinics have typically 5-10°C lower Tg which is the reason for such difference. Having a naphthenic could be beneficial, because due to the higher Tg more oil could be added to the formulation and along that the resin content could be reduced as well. This will result in a lower formulation cost of the adhesive. 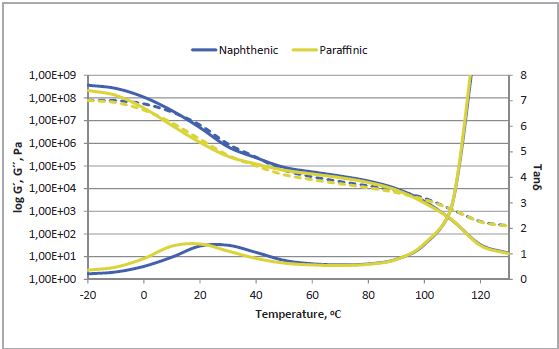 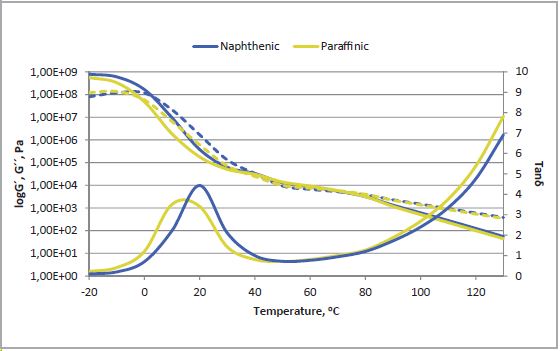 In addition to the Tg, the characteristics of the tanδ curve could also indicate other properties. The higher the tanδ at the Tg, the better the flow and wet out of the adhesive. This has a direct impact on the processing and application of the hot melt. It is typically higher with naphthenics and was observed to be in both EO and PP formulations. In case of PP samples the difference in the characteristic of the tan curve between naphthenic and paraffinic oils is more pronounced. The shape of the Tg peak corresponds to compatibility. Based on this naphthenic and paraffinic oils is expected to have similar compatibility with EO, however Tg peak is much narrower and sharper for naphthenics in PP, therefore it indicates higher degree of compatibility.

In other predicted properties no significant difference was observed. The creep resistance, open time and melting temperature is expected to be similar regardless the grade of the mineral oil.

Effect of oil loading on OBC based hot melt adhesives

Oil content has high importance in hot melt formulation as it impacts the properties and the cost of the final product. Therefore, in order to investigate how different oil levels contribute to the performance of HMA, general non-woven formulations with increasing oil and add-on levels were prepared (Table 2) and the performance of each formulation was evaluated.

Formulation of OBC based HMA

The melt viscosity of each formulation was measured at different temperatures. It was expected that with the increasing oil content the viscosity would decrease as the plasticising effect is more pronounced (Fig. 6). At 140°C there was a slight difference between the viscosity of samples with 15% and 20% oil content. By increasing the temperature the difference seemed to slightly increase as well but still the viscosity of these two formulations were quite similar at certain temperatures. Increased plasticising effect was observed only at the highest oil loading (25%). In this case the viscosity at 140°C was half of the other two samples and has not changed much by increasing the temperature up to 160°C. This indicates that higher oil content could have a significant impact on processing of the hot melt. It is possible to lower the application temperature in combination with higher oil content. This has an impact on energy efficiency of the processing. 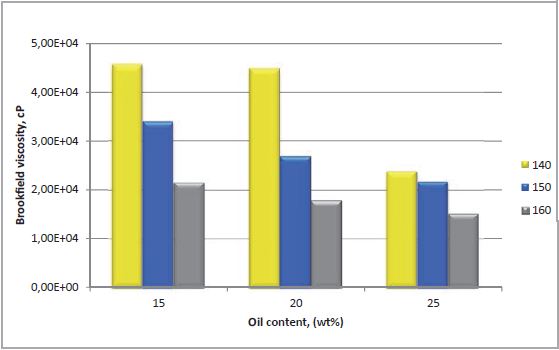 Fig. 6
Melt viscosity of OBC based HMA as a function of temperature and oil content 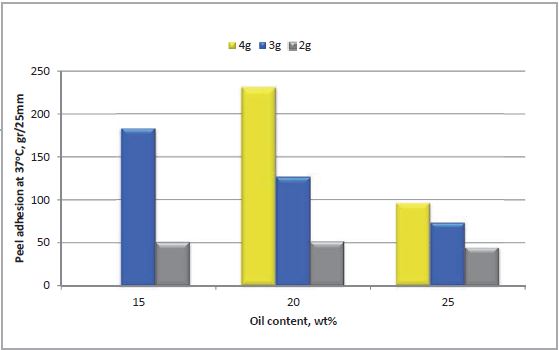 Fig. 7
Peel adhesion of OBC based HMA as a function of oil content.

The effect of the oil content on the rheology was predictable an in-line with the plasticising theories. Typically with the increase of plasticiser the material becomes softer therefore the storage and loss modulus decreases (Figure 8). With the higher oil content the Tg decreases. If the aim is resin replacement and the Tg is a key factor the resin selection plays a vital role. The Tg could be kept constant with an increasing oil content if the tackyfier resin is exchanged to another one with a higher Tg. The tanδ curves also show that the increasing oil content has no influence on compatibility and wet out behaviour, hence the melting point and open time decreased somewhat with the higher oil content.

The study shows that naphthenic oils are highly compatible with mPO based hot melt adhesives. The performance of naphthenic oils in both EO and PP formulations is better than paraffinics. Mineral oils have minimal impact on the shear adhesion failure temperature and this property is mainly governed by the type of polymer and tackyfier resin. On the rheology curves higher modulus was observed for formulations with naphthenic oils, which is inline with the peel adhesion results. In addition, higher wet out and better compatibility was also observed with naphthenic plasticisers. It was shown that the increasing oil content has no effect on the peel adhesion at low add-on levels and has positive impact on the processing properties (e.g. application temperature). Therefore, it is possible to increase the oil content up 20-25% and at the same time decrease the amount of tackifyer resin. This would result cost reduction during processing and on the formulation as well.

Dr. Peter Kaali has obtained his Ph.D. in Polymer Technology from the Royal Institute of Technology (KTH), Stockholm, Sweden. Peter has several years of experience within the polymer industry. Previously, he was a Project Officer at Astute, a project aimed to support industrial growth in the region of South Wales. He was responsible for development of polymer and composite products for mainly the automotive, healthcare and aerospace industry.