As the bulk of any rubber compound is composed of polymers, fillers and plasticising oils, it is only logical that these components should receive a higher attention for finding biobased and other alternatives with additional sustainability value. Polymer producers have been introducing biobased alternatives to synthetic rubbers such as polybutadiene and EPDM rubbers. Hevea natural rubber, itself a renewable polymer, has been vastly used in the rubber and especially tyre industry as one of the most established polymers, although other alternatives such as Guayule and Dandelion natural rubbers are gaining increased momentum [1, 2]. Fillers made from agricultural byproducts such as eggshell [3] and rice husk-based silica [4] have also been studied as sustainable alternatives for rubber reinforcement, with the latter having been commercialized.

Regarding the plasticizing oils, common vegetable oils such as canola/rapeseed and soybean oils have been used by the industry to partially replace conventional mineral oils, while a one to one replacement has been more difficult. In recent years, a more intensive research, mostly from already established tyre oil suppliers, has been done to find suitable tyre oils with improved sustainability [5,6].

In this work, the target was set to take a more holistic approach to increase the biobased content of the whole tyre rubber compound by replacing key components of the rubber from conventional to biobased and sustainable alternatives. Compounds with alternative and sustainable raw materials such as Guayule natural rubber (GNR), rice husk silica and last but not least the biobased tyre oil NYTEX® BIO 6200 were developed and their performance in tyre compounds were evaluated. The results showed the possibility to successfully move towards high performing compounds with a substantially increased amount of biobased raw materials.

For this work, a tyre tread compound formulation, developed at Nynas Technology Center (NTC-S), was selected. The amount of biobased and non-conventional key raw materials – polymers, fillers, and plasticizing oil – was gradually increased by stepwise replacement of standard alternatives, according to Table 1. The rest of the formulation was kept the same for all compounds.

Guayule natural rubber (GNR) was received from the Department of Horticulture and Crop Science (HCS) of the Ohio State University (OSU), while the Hevea natural rubber (HNR) was a commercially available technically specified grade (TSR 10). Key properties of the polymers in study are given in Table 2.

The rice husk silica, Osyzasil HD 165 MP, was supplied by Oryzasil. Both the conventional silica and the rice silica had a surface area of approximately 160 m2/g and were therefore seen as comparable.
Two plasticizing oils were used in this project: NYTEX® 4700 is a naphthenic black oil, one of the most established global tyre oils, while NYTEX® BIO 6200 is a biobased tyre oils launched by Nynas in 2019.

Table 2: Key properties of the polymers in study

Table 3: Key properties of the oils in study

All external raw materials were used as received.

The compounds were mixed in a 3-stage process in a 1.5 l double screw internal mixer with a fill factor of 70% at Nynas Rubber Compounding lab. Vulcanization of subsequent test specimens occurred at 170°C during a vulcanization time relevant for the sample geometry, in a hot press under a force of 300kN.

Characterization of the compounds were done acc to Table 4.

Results and discussion
The mixing process is of a high importance, especially for silica filled tyre rubber compounds. During the mixing process, the silica filler agglomerates are dispersed by the shear forces generated in the mixer, and reagglomeration is prevented by the silanisation reactions between the coupling agent (TESPT in this case) and the silica filler surface. This reaction is assisted by higher temperature and it is considered beneficial for reaching efficient silanisation to mix compounds in a window of 145-155 °C for a certain time.

The mixing behavior of the compounds are displayed in Fig. 1, where relatively small differences were observed between different compounds. It was observed that the target temperature of 145 °C was not reached by any compound. This may be related to the fact that the fill factor in the mixer was somewhat reduced in this project. One trend could however be observed, namely that the compounds made with GNR as one of the polymers developed a lower temperature in the mixer in stage 1 (Fig. 1a). This may be an effect of the lower Mooney viscosity of the polymer. 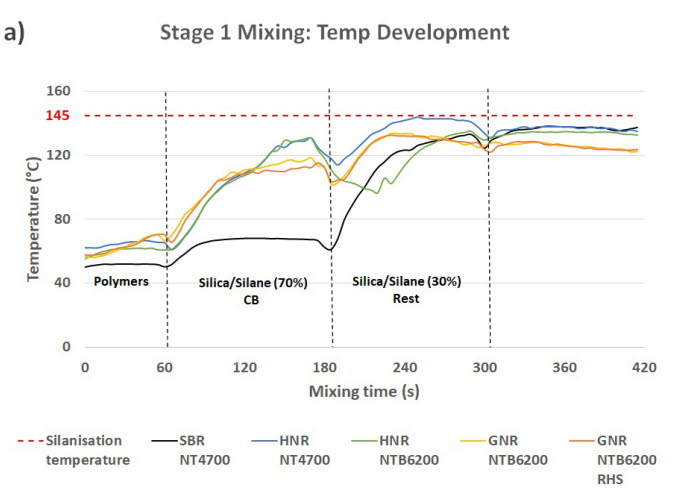 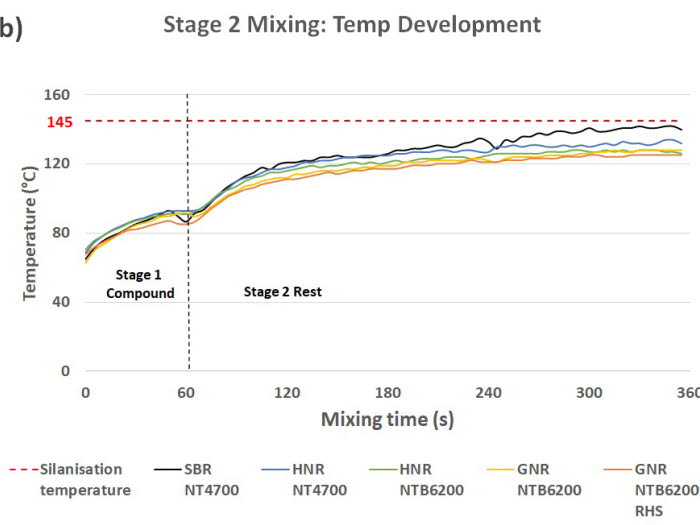 The progress of the vulcanization reaction is seen in Fig. 2. Torque development diagrams (Fig 2a) show that compounds with the conventional tyre oil, NYTEX® 4700, had the highest torque development as well as a high curing rate, where the speed was highest in the compound with HNR as one of the polymers, while substituting NYTEX® 4700 with NYTEX® BIO 6200 in the same compound lead to a lower torque development. This behavior was also observed in earlier works [5] and was easily compensated for by an increase in the vulcanization chemicals, i.e., sulfur and accelerators. In this work however, it was decided to keep the formulations unchanged for all compounds, keeping formulae optimizations for planned coming studies. The introduction of GNR and RHS lead to further lowering of developed torque. 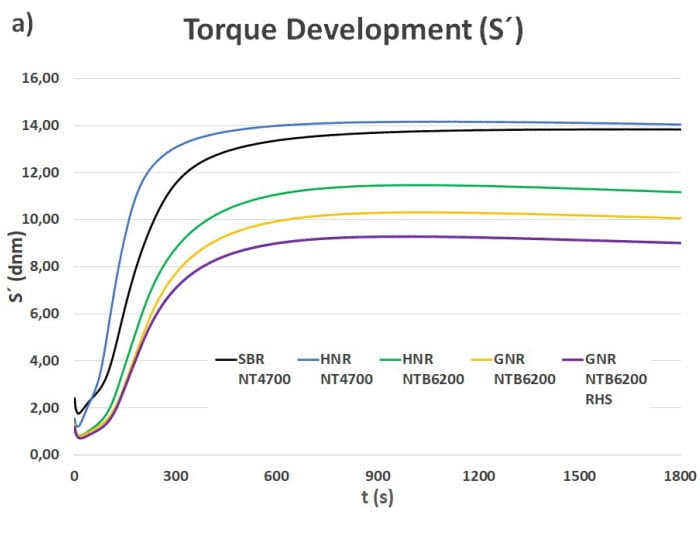 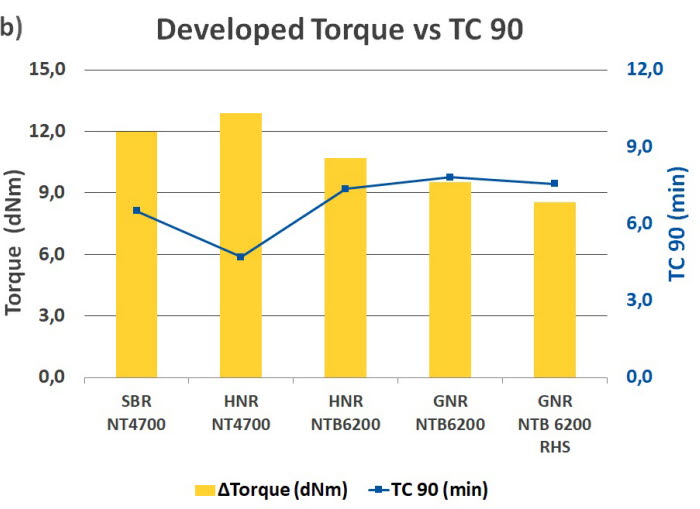 There was a relatively limited variation of the hardness between the studied compounds (Fig. 3). The change of SBR to HNR did not change the hardness significantly while the introduction of NYTEX® BIO 6200 in place of the conventional oil lead to a small increase. Although one conclusion of this could be a lower plasticizing power of the oil, it is contradicted by the tensile properties (Fig. 5) where tensile strength and elongation at break are the highest in the range. GNR seemed to have a lowering impact on hardness which could be related to intrinsic properties of the polymer and the lower crosslink density as observed by the torque development (Fig. 2a). 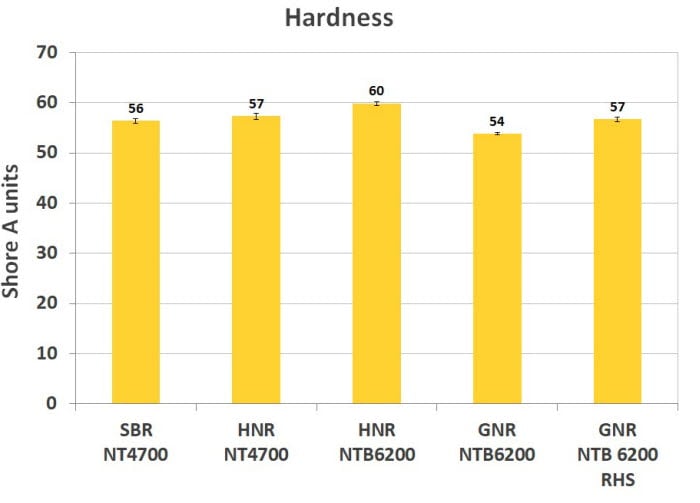 Abrasion of the studied compounds are shown in Fig. 4 where the only significant differences were seen in compounds with GNR as one of the polymers. This could be explained by the lower hardness as well as a lower crosslink density observed in these compounds. It needs however to be restated that compensating for a lower crosslink density is relatively easy by optimization of the curing chemicals which was shown in an earlier work by the same authors [5]. 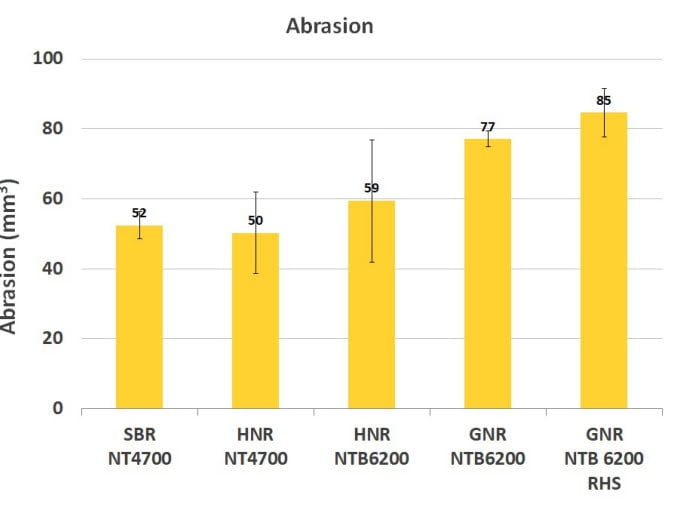 Changing the polymer from SBR to HNR lead to a higher elongation at break as well as a lower modulus development (Fig. 5). Further replacement of the conventional oil by NYTEX® BIO 6200 increased both tensile strength and elongation at break while at the same time displaying a high value in tensile strength at 300% elongation, despite indications of somewhat lower crosslink density. Furthermore, the difference between compounds made with alternative raw materials were within the normal variation of the analysis. These results show the promise of reaching desired high performance criteria with non-conventional raw materials in tyre rubber compounds. 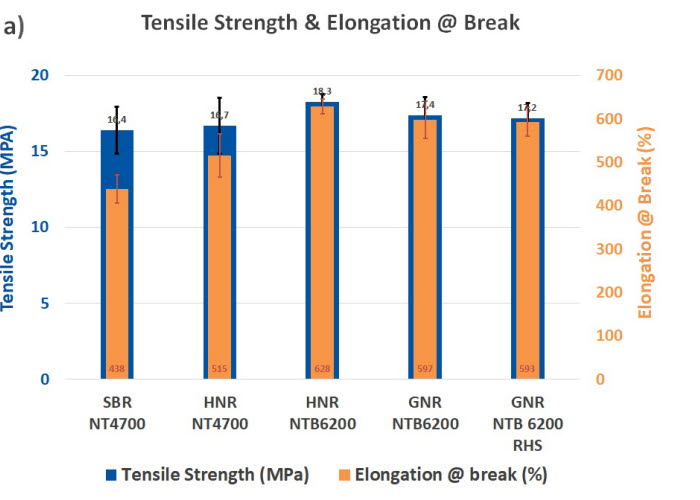 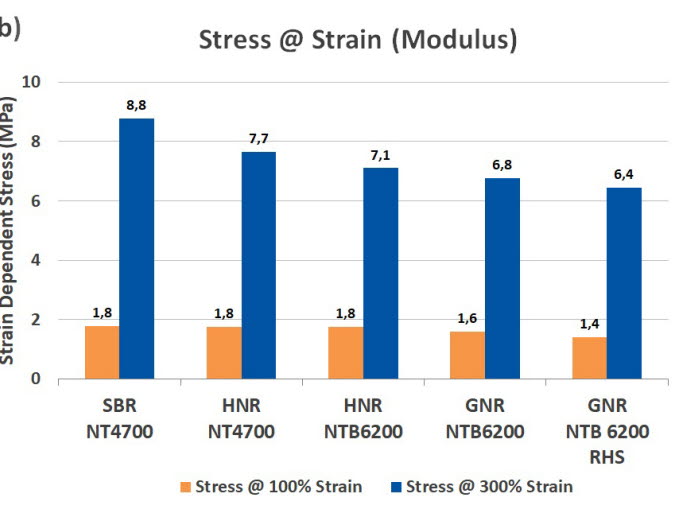 Dynamic properties, especially the values of the loss factor, tan d, are often used to predict key performance criteria on traction and rolling resistance properties of tyre rubbers. Such properties for the studies rubber compounds are displayed in Fig. 6 and 7. Fig. 6a shows the tan d curve on a temperature sweep where the smooth shape of the curve is indicative of a homogeneous compound. This would confirm a high degree of compatibility of the alternative raw materials between themselves and with the rest of the compound components. The peak tan d (Fig. 6b), often used in place of Tg (peak loss modulus) shows another interesting aspect. As can be seen, despite the fact that NYTEX® BIO 6200 has a significantly lower Tg in the oil phase compared to NYTEX® 4700, its replacement in compound actually leads to a marginal increase in the compound Tg. This phenomenon was also observed in earlier works by the same authors [5] and while the fundamental reason for this will be the subject of future studies, it confirms previous observations and points to a consistent trend. The higher Tg is not however resulting from a lower plasticizing power of NYTEX® BIO 6200 as witnessed by the performance in hardness as well as tensile properties of the rubber material. The change from HNR to GNR did also lead to a slightly higher Tg, which taking into account the substantially lower Mooney viscosity of the polymer (Table 3), could possibly be a consequence of a higher crosslink density. 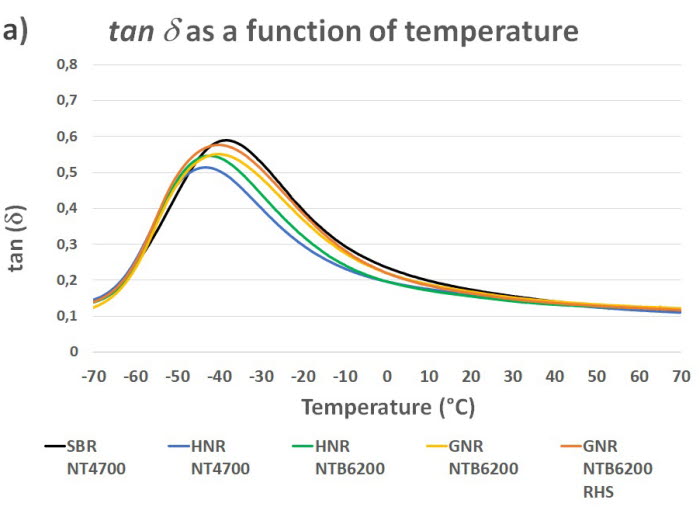 tan d at 0 °C and at 60 °C are commonly used as indicators for wet grip (WG) and respectively rolling resistance (RR) performance of the tyre. Such a comparison between studied compounds can be seen in Fig. 7 where all values have been normalized to that of the fully conventional rubber compound. The largest differences seem to be dependent on the change of the polymer (from SBR to HNR to GNR). The replacement of NYTEX® 4700 to NYTEX® BIO 6200 seems to give relatively small differences, while an adjustment of the curing additives is expected to lower the values of RR. The further introduction of the rice husk silica did not cause any significant change in the dynamic performance of the rubber materials. 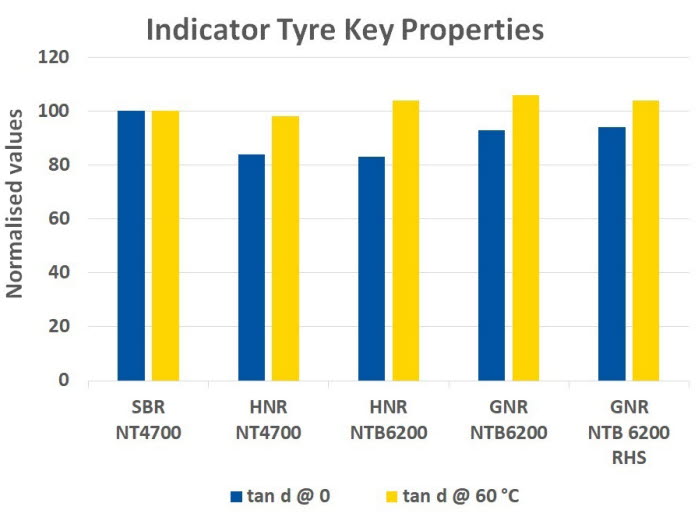 The main objective of this work was to investigate the potential of a few alternative raw materials with improved sustainability profile, compared to conventional counterparts, in tyre rubber applications. Although further studies are required to reach a higher understanding of the fundamentals, the results clearly show the potential of such components in providing high performing rubber materials with additional benefits in overall sustainability of the rubber compounds. The relatively small differences between the studied rubber materials are expected to be addressed by relatively simple reformulations, mainly on the curatives package. This is certainly true to NYTEX® BIO 6200 as shown by previous studies.

Furthermore, the increasing number of raw materials from biobased and other alternative sources confirms the strive of the raw material supply chain to meet the challenge towards increased sustainability that the entire industry is standing before.

Dr Katrina Cornish of Ohio State University is gratefully acknowledged for providing the Guayule natural rubber used in this study and for invaluable discussions on the subject.