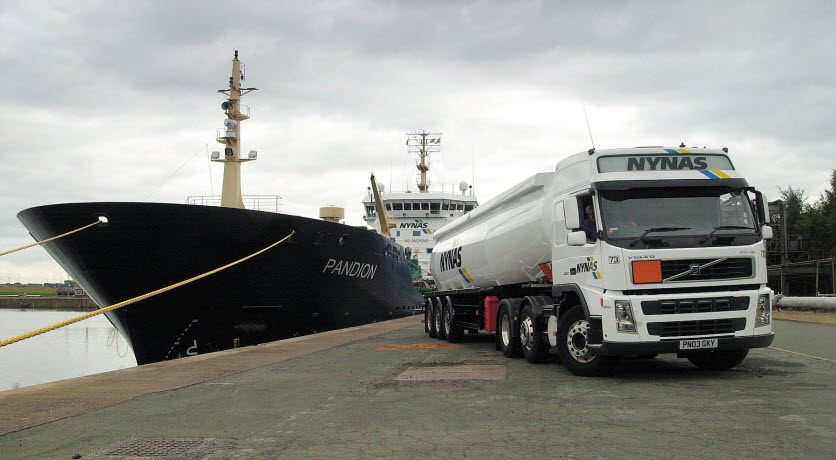 Intermodal means that a number of different transport methods are used to deliver a product. One example is when a container or semi-trailer is transported by both rail and truck or ship to the final destination. This means that the actual goods never need to be touched during transhipment.

An increase in the use of intermodal transport solutions has been prescribed within the EU. The hope is that this will lead to better utilisation of the European rail network as well as shipping, which will in turn help ease traffic stress on motorways.

This is a solution that Nynas has adopted. The first delivery was made in 2009, when road tankers were loaded with bitumen in Antwerp before being transported by a dedicated train to South-western France. Since 2012, there has been intermodal transport solutions to customers in France, Switzerland and Italy. The deliveries are organised in two ways. Either the road tanker is driven to the combi terminal used for transhipment and then transported in full by rail or, if containers are used, they are lifted from the road tankers onto the train.

Nynas’ intermodal transportation of bitumen is expected to increase over the next few years. It will also be possible to arrange it to more countries than previously, as railway operators extend their networks, in the first instance in Germany, the Czech Republic, Slovakia and Poland.

And the benefits are obvious. In cost terms, there is an improvement compared with conventional road transport. There is also less risk of accidents, while at the same time there is better resource utilisation because of the bigger loads and fewer transport movements.

Another significant advantage is the environmental impact. Statistics from 2013 show that the use of intermodal transport solutions results in an average reduction in carbon dioxide emissions of 75% (www.uirr.com, www.ecotransit.or). This means that Nynas and its customers are making a contribution towards sustainable development.

Development work is now continuing. The challenges include becoming more competitive making better use of the rail network, especially in Germany and Eastern Europe, and generally increasing volumes in order to be able to maintain a good level of transport preparedness throughout the whole bitumen season.