Financial losses resulting from rust or corrosion are a serious problem in all industrialised countries. The total direct and indirect costs of corrosion has been estimated to be approximately 4% of a country’s Gross National Product. The most common form of corrosion is that caused by air and water, which affects steel used in cars, bridges and buildings. In other words, common rust.

In many cases it is financially justifiable to invest in permanent rust protection, either by galvanising - coating with other metals - or through the use of organic coatings such as lacquers or resins. These techniques are an effective way of protecting the metal, but they are not always suitable for every application.

There are three main requirements of an effective temporary rust preventive system. Firstly, the substance must bind itself to the metal surface and inhibit oxidation. Secondly, the film should give mechanical protection against moisture. And finally, the method of application must ensure the entire surface of the metal is evenly covered by the rust preventive agent.

In general two components are essential to achieve this. One component (rust inhibitor) is active and provides the chemical, and possibly also the mechanical, protection of the metal. The other ingredient acts as a carrier for the active component and ensures that it can be spread efficiently over the metal surface. Other additives, such as UV-stabilisers, are also used in some agents.

There are a number of substances that can function as the active component in a rust preventive agent. But all are soluble in water and consist of both polar and lipophilic groups. The polar group can be cationic, such as an amine, or anionic, which is commonly a sulphonate. Which works best depends on the ionic charge of the metal surface. The most common type of rust inhibitor has sulphonate as its polar group.

Sulphonates form strong bonds with the metal surface because they are chemically adsorbed by the metal. In addition, the sulphonates form small drops in oil that entrap polar compounds such as water and organic acids, rendering them harmless.

A rust preventive agent can be either water-based or solvent-based. Water-based agents have an environmental advantage and are less flammable. However, water must evaporate from the rust preventive film so as not to increase the risk of corrosion. The active component should instead be surrounded by an oil, in other words, the polar group should be bound to the metal and the lipophilic group should be dissolved in oil.

Rust preventive agents are generally supplied as a concentrate comprising the active components, additives and emulsifier, dissolved in oil. Therefore all the components must be easily soluble in oil. This concentrate is mixed with water by the end-user to form an emulsion. The active component acts as an emulsifier and ensures that the oil is dispersed in small drops and evenly distributed in the emulsion. The polar group is found in the water phase and is therefore available for binding to the metal.

So what are the qualities that a mineral oil needs to function as a carrier in a water based rust preventive agent? Firstly it has to be able to function in different environments, but it must also be able to dissolve inhibitors and additives with strongly polar groups. The oil must provide a stable emulsion and remain in a thin film on the surface of the metal.

Naphthenic oil has more polar characteristics than paraffinic oil, which makes naphthenic oil a better choice for use as a carrier in a water-based rust preventive agent. This has been demonstrated by the results of experiments which tested the stability of 15% emulsions of a rust preventive concentrate.

In the first test a concentrate with the following composition was used:

The mineral oils used were two naphthenic oils from Nynas, T22 and Nytex 810, and a paraffinic oil with approximately the same viscosity.

The critical property in an emulsion is its stability. This is gauged by measuring the amount of’cream’ which forms on the top of the emulsion.

The emulsion containing the paraffinic oil formed a 17ml layer of cream after a few hours, plus a layer of free oil also formed. ln the Nynas naphthenic oil T22 the cream formed more slowly and only 5ml was produced. It was also easier to return the naphthenic based sample to a homogenous emulsion through simple agitation. Similar results were obtained with the Nynas Nytex 810 oil.

Two further experiments were conducted to find out how much emulsifier would be needed to obtain an equally stable emulsion with paraffinic oil emulsion.

In the second test a concentrate with the following composition was used:

The stability was somewhat better than that exhibited by the paraffinic based emulsion used in the first test, but a 9ml layer of cream formed and a layer of free oil was still present.

In the third test, 1% of the non-ionic emulsifier Eumulgin EP 20 was also added. In spite of this, stability did not increase noticeably and an 8ml layer of cream formed.

In conclusion, rust preventive agents that contain naphthenic oils are considerably more stable than emulsions formed with paraffinic oils. For the user this brings practical advantages because it is easier to work with a stable emulsion than with one that has to be applied immediately to avoid separation. For the concentrate manufacturer there are also economic advantages as the need for emulsifier is reduced. 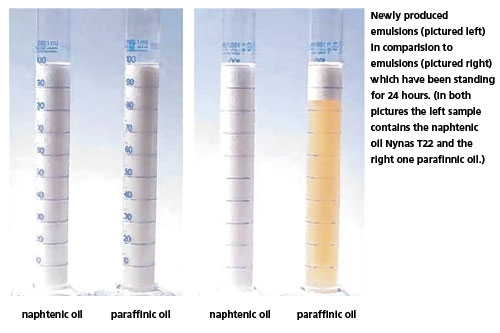 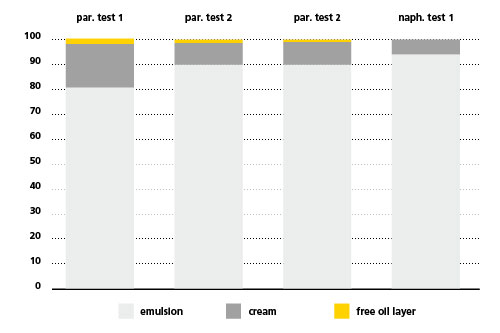 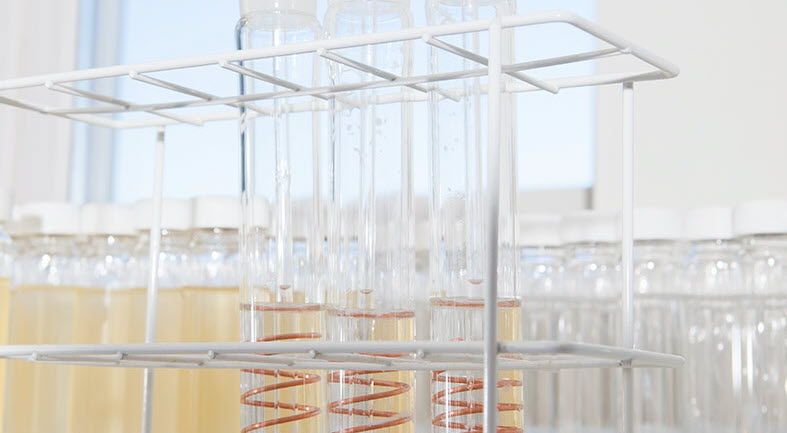 Naphthenic base oils have long held a strong position in the metalworking fluids market – its better solubility and the ability to form stable emulsions give clear advantages over paraffinic base oils. The development of new additives for paraffinic oils has shortened Naphthenic's lead, however. Valentina Serra-Holm of Nynas R&D has conducted comparative studies to discover whether paraffin base oils have actually caught up. The answer is an emphatic no. Read more about Naphthenic oil best for metalworking