About 50 kilometres south of Dubai is the largest single-site solar energy project in the world. Nynas oils help insulate the plant’s transformers. 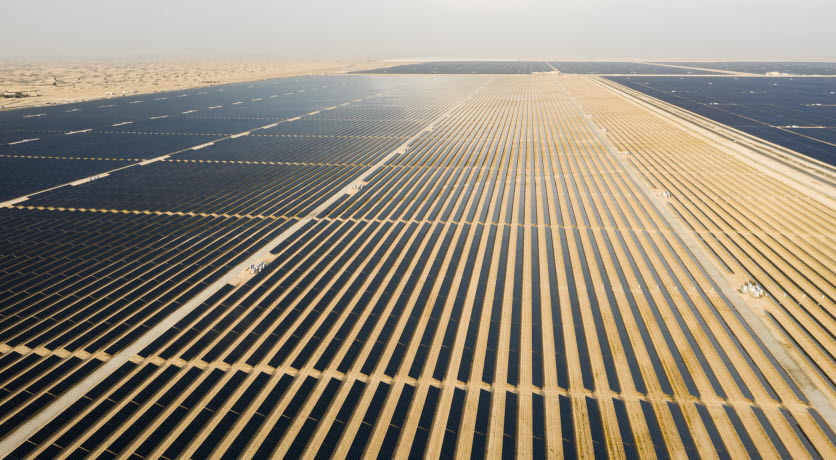 The Mohammed bin Rashid Al Maktoum Solar Park currently operates just over 1 GW of solar photovoltaic panels. A combined investment of USD 13.6 billion, the aim is to reach 5GW by 2030, which will save approximately 6.5 million tonnes per year in CO2 emissions.

In 2017, the 200MW second phase of the solar park — Shuaa Energy 1 — became operational. The plant uses fixed-tilt thin film technology, has more than 2.3 million solar panels and provides clean energy for 50,000 residences in the Emirate. The Dubai Electricity & Water Authority (DEWA) awarded the project to a consortium led by ACWA Power from Saudi Arabia as the main developer, with Spanish engineering services provider TSK as the main contractor.

“The United Arab Emirates’ interest in producing renewable energy has contributed to the decline of its global cost to competitive levels. This was clearly shown by DEWA setting a world record, obtaining the lowest price globally for the second phase of the solar park, at USD 5.6 cents per kilowatt hour,” said His Excellency Saeed Mohammed Al Tayer, MD & CEO DEWA, in connection with the inauguration of Shuaa Energy 1.

GE Grid Solutions, a part of the global industrial giant GE, which brings together technologies and expertise to help solve the toughest power system challenges, was selected to supply inverters, transformers and switchgears to the plant, which covers around 4.5 km2, the equivalent of more than 600 football pitches.

“Our commitment included the 220MW LV5 series of liquid-cooled inverters that have been specifically designed to deliver in the harsh desert conditions,” notes Sedat Bacanak, Project Manager at GE Grid Solutions.

In order to fulfil that promise, Nynas NYTRO Taurus oil was selected by GE to provide insulation for the electrical equipment. It provides good oxidation stability for enhanced transformer life, minimum maintenance and has been developed for the most demanding applications.

“We have been collaborating with Nynas for many years, including this very prestigious and important project for us,” says Sedat Bacanak. “A well-known and reputable producer, it is a partner we can do business with in a flexible way to meet our needs and project requirements.”

In addition to excellent product performance, Sedat Bacanak singles out Nynas’ customer service and logistics capabilities as key advantages in the partnership.

“For example, there were some complications that resulted in an immediate need for NYTRO Taurus to be delivered to the site. But we were having some difficulties to locate and overcome customs and other local transport obstacles.”

“We requested Nynas’ support, and as always they were able to deliver the fluid on a DDP (Delivered Duty Paid) basis to the site door. This helped us a lot, easing our complications and allowing us to deliver to the customer on time.”

As the energy industry is currently undergoing a transformation towards a broader mix of fuels and sources, the electricity grid must also evolve and adapt. Both GE and Nynas offer crucial products for this transformation. Sedat Bacanak expects the successful partnership to continue.

“We have used Nynas products in hundreds of our units and will be using them again in the future,” he concludes.

The Mohammed bin Rashid Al Maktoum Solar Park was announced in 2012 as a part of the vision to make Dubai a global centre of clean energy and green economy. The strategy aims to provide 25 % of Dubai’s energy from clean energy sources by 2030 and 75 % by 2050.

The solar park is the largest renewable energy project on a single plot in the world, with a planned production capacity of 5,000 MW upon completion in 2030. Its second phase was inaugurated in March 2017 with a capacity of 200MW generated by photovoltaic technology. The third phase added another 800MW capacity at its launch in late 2020.

The fourth and fifth phases are currently being developed and will use a variety of technologies, including a solar tower, 70,000 heliostats and the largest global thermal storage capacity of 15 hours.