Metalworking fluids (MWF) are used to aid the process of metal machining, mainly by providing lubrication of the workpiece and tool, by providing cooling and corrosion protection.

Metalworking fluids can be generally categorized as being either
• emulsions (“coolants”), which mainly cool and protect against corrosion, or
• neat oils, which can handle better high deformation, severe boundary lubrication and offer improved tool wear protection

In metal cutting, the metalworking fluid flow has another very important task, which is breaking and flushing away the chips and swarf as these form.

The make-up of a typical metalworking fluid emulsion is a dilution (not a “neat” oil!) of 5 to 10 volume-% mineral oil concentrate in water. This water could be tap water, with whatever water hardness the local source offers, or demineralised (Demin) or Reverse Osmosis (RO) water which is very soft. The mineral oils content is high, typically 60-70% of the concentrate, and the remainder being oil soluble additives: Emulsifiers, Lubricity additives, Corrosion inhibitors, Biocides, Antifoams and Mist suppressants. Applications for emulsions include use as cutting fluids, corrosion protecting fluids and hot rolling fluids. Emulsions are suitable for high-speed cutting operations where much more heat is generated.

Naphthenic base oils provide several advantages to MWF formulations. High solvency allows for the dissolution of high amounts of additives, and contributes to increased emulsion stability. In addition, a lower density difference between naphthenic oil and water compared to paraffinic oils also provides increased emulsion stability, as gravity has less of a density difference to pull on. This also increases emulsion resistance to centrifugal forces during pumping.

Thus, there is an intimate relationship between the formulation chemistry and the performance of metalworking fluids. To investigate how key formulation parameters, such as selection of base oil, emulsifier system, and water hardness affects the emulsion stability, a series of emulsions were formulated where the base oil, the emulsifier type and Hydrophile-Lipophile Balance (HLB) value, and water hardness were parameters changed independently.

In this study, we set out to investigate how the emulsion droplet size distribution would vary as the result of formulating changes varied, and how that distribution changed over time. Results were obtained and analysed for Naphthenic, Group I and Group II base oils.

Emulsion stability is key to metalworking fluid (MWF) usefulness- if the emulsion breaks, it has ceased to function. Investigations of the relationship between formulation and emulsion stability thus is a first step towards better understanding of the complex chemistry of a fully formulated MWF. Test parameter in the study were base oil type selection, water hardness and emulsifier chemistry and Hydrophile-Lipophile Balance (HLB) value selection. We sought to understand how the properties of the base oils, especially solvency (Aniline Point), and the water hardness (°dH) would influence emulsion stability over test period up to one week. A second step was to investigate a semi-synthetic formulation giving transluscent mictso-emulsions utilizing the same base oil slate.

A metalworking fluid (MWF) Soluble Oil (Conventional Oil) emulsion stability study was set up, comparing the properties of a Naphthenic base oil, versus three paraffinic type base oils of similar viscosity, ca. 20 cSt (100 SUS) at 40 °C, see Figure 1. NYNAS™ T 22 is a good example of the quintessential “100/100” metalworking fluid oil, having a viscosity of 100 SUS at 100 °F. As Group I oils we picked a traditional SN 100 oil, and the NYBASE® 100, which belongs to a New Range (NR) of Group I replacement products. These have been designed to have Kinematic Viscosity (KV), Viscosity Index (VI) and Aniline Point (AP) closely matching those of existing Solvent Neutral Group I base oils. The properties of these new products are described in a previous publication [1] and more information is available on www.nynas.com. In this study, further work on model metalworking fluid emulsions was undertaken to search for more likenesses versus Group I. The last test oil was a conventional Group II base oil of similar viscosity.

All emulsion concentrates were of the same oil content, with surfactants to make up the required HLB value. The concentrate was added to the water at ca. 5 v/v-%, and sonicated at low power for three minutes.

The Soluble oil (milky) emulsion droplet size distribution (DSD) was determined at three different times; at mixing, after one day, and again after seven days. The droplet size was measured at high dilution by a Malvern Mastersizer 3000 E.

The droplet size distribution varies over two orders of magnitude, from very small (1 μm or less) to close to 100 μm, see Figure 2. The smaller the droplet size, the more stable the emulsion. 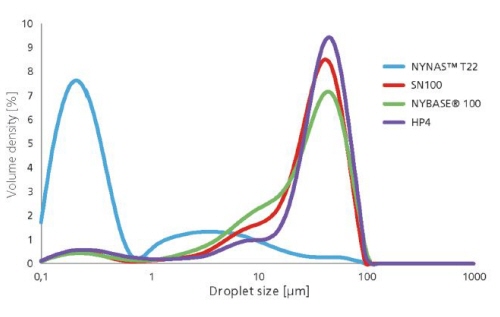 In Figure 2, the droplet size distribution statistical mean value is plotted versus HLB. These graphs typically will show an “U”-shaped minimum where the emulsion droplet size, is the smallest, and hence at which HLB the most stable emulsions are formed. Similar plots were obtained for the Group I, NYBASE® new range Group I replacement, and Group II formulations.

An increase in mean droplet size over time is observed: Day 0 (Blue bar), Day 1 (Red bar) and Day (7 Green bar) in general show increasing value with time (larger droplet size). Since a gradual increase of droplet size would be the earliest warning sign and the first steps towards coalescence and emulsion break-up, this is very interesting information. 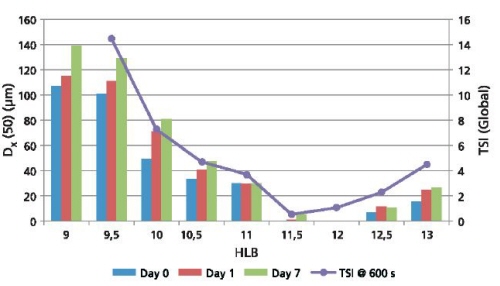 Figure 2. DSD development over 7 days versus TSI (10 minutes) for a NYNAS™ T 22 based milky emulsion.

For the more paraffinic oils the optimum HLB was close to 10, but the value of the minimum droplet size was in no case below 10 μm, more than 20 times larger than for the naphthenic NYNAS™ T 22 oil. One example is shown in Figure 3. 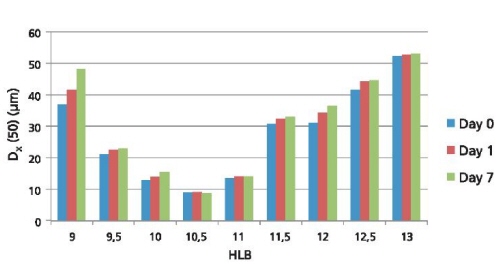 The TSI development during the first ten minutes after sonication is shown for nine samples with HLB from 9.5 to 13. The most stable properties for the NYNAS™ T 22 based emulsion were found around HLB 12, similar to what the droplet side distribution (DSD) experiment indicated. A good correlation was found between the DSD established, and the TSI calculated from the emulsion phase thickness measurements utilising the Turbiscan instrument, for those oil and emulsifier combinations that gave good (small) droplet sizes. In Figure 3, the “U-shape” of the DSD is mirrored by the TSI values.

As a second phase of the study, we made semi-synthetic translucent micro emulsions of the same four base oils. The emulsion concentrate contained 36% water, 30 % base oil, and a range of additives (34% in all): Tall Oil Fatty Acid (TOFA) as the main emulsifier, a non-ionic Fatty alcohol alkoxylate as co-emulsifier, aminic bases, steel and yellow metal corrosions inhibitors, coupling agents and biocide. The concentrate was added to the water at ca. 5 v/v-%, and sonicated at low power for three minutes.

The resulting semi-synthetic micro emulsion droplet size distribution (DSD) showed some interesting differences versus the milky Soluble oil emulsion, Figure 5. All four oils, in hard or soft water, display droplet sizes below 10 μm. For the NYNAS™ T 22 in soft water (both om Day 0 and Day 7), most the droplet sizes are below 1 μm (the absorption peak below 1 μm). In contrast, in hard water, NYNAS™ T 22 displays two peaks, at 0.3 μm and one about 1.3 μm. The SN 100 in hard water displays a broad peak around 0.5 μm (both Day 0 and Day 7). In soft water, the peak is shifted up towards 0.8 μm and is narrower in shape. The Group II oil (HP 4) display narrow peaks centred around 1 μm in both hard and soft water. The NYBASE® 100 at Day 7 displays broader peaks centred around 1.2 μm, in hard water, a broad peak (0.5 μm to 5 μm) above 1.1 μm, possibly obscuring a bi-phasic behaviour, which is not baseline separated. In contrast, in soft water the peak at 1.2 μm is (somewhat) more narrow.

An attempt to summarize the above results would be that NYNAS™ T 22 in soft water yields the most stable emulsion with the smallest mean DSD. For hard water, the result spread is larger, and both SN 100 and NYNAS™ T 22 display notable peak maximum shifts, but in opposite directions of change with water hardness. 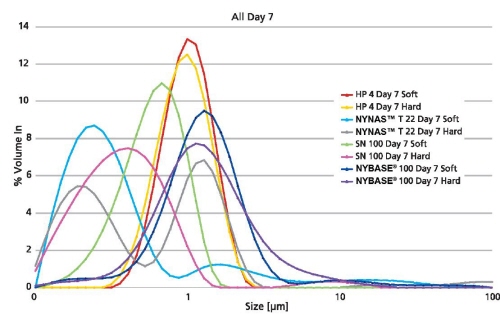 In this study, we set out to investigate different parameters affection the primary emulsion stability of model metalworking fluids. We could determine the optimal HLB value for the different base oils, and could also observe large differences in emulsion stability. The primary contribution to stability, as demonstrated by a low (1 μm or less) mean droplet size, was found to follow solvency; the lower the aniline point, the more stable the emulsion formed in the Soluble oil coarse (milky) emulsion system based on non-ionic emulsifiers. The Naphthenic base oil emulsions display the highest stability, followed by the Group I and Group I replacement base oils, then Group II. The solvency, as indicated by the aniline point, mirrors this order, and thus apparently plays an important role for emulsion stability in the systems investigated.

The second part of the study was on semi-synthetic translucent formulations, based on anionic and non-ionic surfactants. For these samples, the DSD in general was much smaller, indicating even better emulsion stability. This system did display sensitivity towards water hardness, as expected from the anionic surfactant chemistry. The extent and character of the effect was different for the different base oils. The clear bi-phasic nature of the NYNAS™ T 22 based micro emulsion in hard water, warrants closer study. Also, the peak area around 10 μm would be expected to grow at longer observation times, and would be interesting to follow. Possibly this is a similar bi-phasic behaviour, but shifts up towards much larger droplet size? However, the general stability trend follows what we found for the milky emulsions: Naphthenic > Group I > Group II.

We could determine a preferred HLB value for each base oil type, where the optimum conditions for emulsion stability was found. This HLB value was found to be about two (2) units higher for the naphthenic base oil compared to the paraffinic Group I and II base oils. The droplet size and stability nevertheless was found to be better for the naphthenic base oil systems, showing an inherent difference under these varying conditions.

The key base oil property difference identified was solvency, as expressed by the aniline point. The water hardness played little role in the non-ionic surfactant (emulsifier) systems, but made a difference in several ways in the semi-synthetic emulsion systems, containing also anionic surfactant.

We would like to propose that the results obtained in this study would be useful as a component selection guide to metalworking fluid formulator across geographical regions, with varying water hardness, and different access to base oils suitable for metalworking emulsion formulations.

Original place of publication is LUBE Magazine No. 139, June 2017 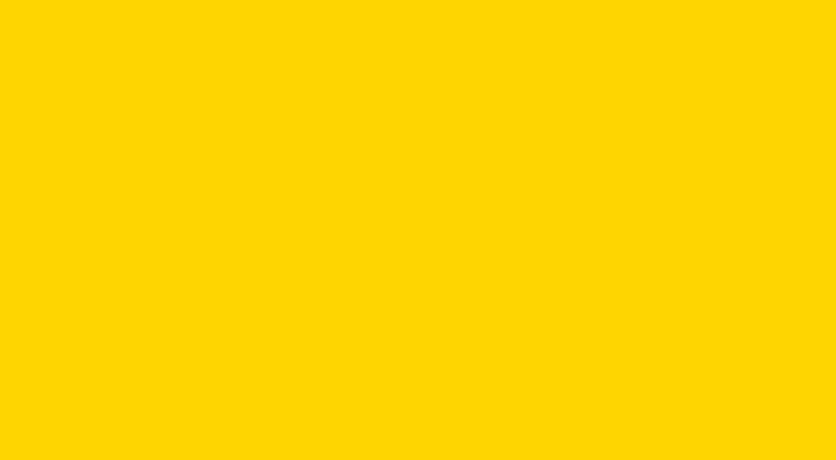 Nybase 100 is a mid-range viscosity specialty base oil for Group I replacement, with very good low temperature properties and a high VI, suitable for industrial and metal working fluids.