Federal highway A5 (BAB 5), between Frankfurt and Darmstadt

The section of Federal highway A5 between Frankfurt and Darmstadt is one of the most heavily trafficked highways in Germany carrying more than 125,000 vehicles per day. Part of the important north - south axis, it provides a link between Frankfurt airport and the southern parts of Germany and also Switzerland. 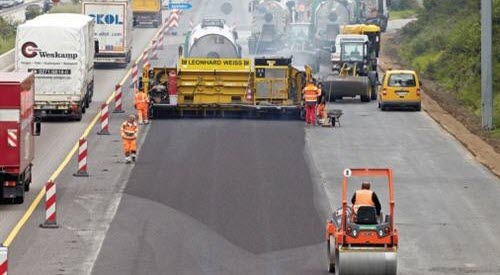 Nynas Endura N3 is a highly polymer modified Premium hot mix binder. The product has excellent workability characteristics and has been specially developed to deliver the optimum balance between toughness and flexibility. Nynas Endura N3 is suitable for the most onerous Gussasphalt paving applications.

The section of Federal highway A5 between Frankfurt and Darmstadt is one of the most heavily trafficked highways in Germany carrying more than 125,000 vehicles per day. Part of the important north - south axis, it provides a link between Frankfurt airport and the southern parts of Germany and also Switzerland. The highway was built in the 1930s and widened to four lanes in each direction during the 1970s; the concrete carriageway showing clear signs of its age in recent times. Localised cracking and breakage of the slabs were requiring many small repairs resulting in high maintenance costs. Structural restoration was planned to be carried out in several sections: due to the heavy traffic load, four lanes in each direction had to be kept open.

A Gussasphalt MA 11 S was specified for the wearing course of the new asphalt structure, a material that – according to German regulations – conforms to the specifications for the highest construction class for carriageways under heavy traffic. Positive results in the last decades mean that highway authorities are keen to exploit this technology. For the A5, the Gussasphalt had to display high resistance to deformation and fatigue; the material withstanding reliably and for the long term the considerable loadings imposed by commercial traffic.

Further requirements of the Gussasphalt mix for the wearing course were that it should provide good workability at relatively low application temperatures and also a dense layer when laid, without gaps to prevent ingress of water or oxygen, thereby resisting premature ageing of the bitumen.

Restoration of what is a heavily trafficked highway in different sections required special job site management. The whole project extended to a length of 15km. Within the construction period of 13 months, over 500,000m2 of concrete and asphalt layers had to be removed, recycled and reused during construction of the new asphalt carriageway under open traffic. Over 13,000t of asphalt were laid per day at peak laying times on the site.

Nynas Endura N3 was chosen as the binder for the Gussasphalt as it fulfilled all the required performance qualities, providing optimised workability during production of the asphalt mix. In addition to high levels of durability, fatigue resistance and low temperature flexibility, surface characteristics of evenness and high resistance to skidding were achieved; to ensure a sustainable long lasting asphalt structure. The even texture was due in no small part to the good adhesive characteristics of binder with the chippings.

Download this information on how Nynas Endura N3 was used at Federal highway A5, Germany, as pdf.

SITE NAME Federal highway A5 (BAB 5) between Frankfurt and Darmstadt