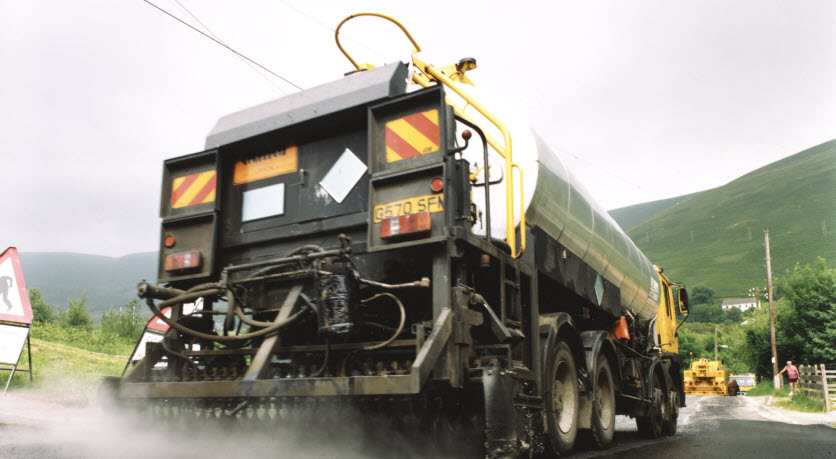 Surface dressing is often used in Estonia for maintenance of parts of the road network with low or medium traffic levels. One drawback is that significant speed restrictions are required in the days following completion of the work while the surface dressing takes time to develop strength to allow sweeping to take place.

To deal with the time lag, the Estonian Road Administration decided in 2011 to lay a trial section using a polymer modified emulsion – Nymuls SD 105 – similar to a product that has been used with success primarily in the UK. The outcome of the trial was promising and in June 2012 the road authority decided to test the same product on two major surface maintenance projects in the south west of the country.

The sections surfaced are around 5kms in length with the most heavily used having an average traffic intensity of up to 2500 vehicles a day. Nynas supplied around 110t of Nymuls SD 105 to each section from an emulsion plant in Tallinn.

The work was carried out using the ‘racked in’ method which has proven extremely effective for surface dressing. Expressed briefly, this involves the emulsion being applied first. The gravel is then laid in two different layers – larger diameters of gravel followed by smaller diameters – before rolling takes place.

As the stones in the two layers are of different dimensions (8-11mm and 4-8mm respectively), they sit tightly together and are then held firmly in place by the polymer modified emulsion. The outcome in this case was that maintenance operatives could sweep the carriageway the next morning and then allow traffic through without any restrictions, instead of after four or five days as normally happens with conventional surface dressing.

Another benefit is that the properties of the racked in form of surface dressing reduce traffic noise, with the polymer modified bitumen making the surfacing more durable. This allows the road authority to defer the timing of the next planned round of maintenance.

The surface dressing of the two roads in Estonia was very successful. In addition to traffic being able to resume sooner, thanks to the rapid retention of the stones, polymer modification combined with the racked in method means that the surface is more resistant to both faster and more intensive traffic.

Experiences from the UK, where polymer modified emulsions are now the most common types used in surface dressing, demonstrate that these surfaces can also be used on roads with an average traffic intensity in excess of 10,000 vehicles a day.