Revealing the role of sulfur

As sulfur holds the key to antioxidant behaviour in base oils, model studies help Nynas researchers realise how to improve the oxidation stability of the company’s lubricant base oils through the addition of sulfur-containing secondary antioxidants.

“Actually what we have shown now is the formulation of oxidation stability in model systems,” states Professor Thomas Norrby, Senior Lubricant Specialist at Nynas.

Studying the relationship between oxidation stability and the sulfur content of base oils, Thomas Norrby and his colleagues in Nynas Technical Development and Market Support team were able to demonstrate that the oxidation stability of the company’s NYBASE® oil range can be controlled through the addition of sulfur-rich base oil components and sulfur-containing secondary antioxidants.

Their work promises to serve as useful guidance for formulators wishing to optimize the antioxidant response in finished lubricant products.

The NYBASE® oil range was introduced to replace Group I base oils, as these are becoming scarce due to ongoing changes in the refining industry. Blends of highly refined and hydrotreated naphthenic and Group II oils, the NYBASE® oils have been engineered to have solvency and viscosity properties similar to Group I oils, but with a low aromatic content.

“The trouble is, when you get rid of the polycyclic aromatic hydrocarbons you also lose most sulfur compounds. As a result, the NYBASE® oils have a lower sulfur content than Group I base oils, which is unfortunate as a high sulfur content in the base oil is known to promote antioxidant performance,” explains Thomas Norrby.

During the past few years of in-depth and systematic investigations of the key properties of the blended base oil range, the researchers did indeed find a lower response to primary antioxidants in NYBASE® oils than in Group I oils.

“This made us take a closer look at the role of sulfur, and at the correlations between added primary and secondary antioxidants and overall base oil sulfur,” says Thomas Norrby.

“We found that the simplest way for an end-user to significantly improve the antioxidant response in our NYBASE® oils is to add sulfur in the form of sulfur-containing secondary antioxidants. In fact, a comparative study showed that this method could result in a better performance than that of Group I oils,” he says. 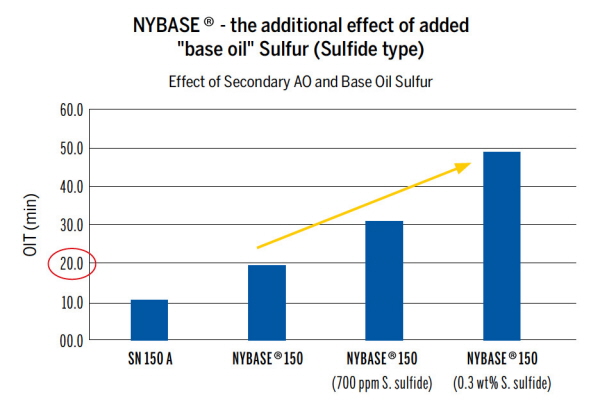 • The researchers used High Pressure Differential Scanning Calorimetry (HP-DSC) to study the effect of the sulfur content in base oils. The Oxidation Induction Time (OIT) was determined at oxygen levels of 35 bar and 200°C.

• They found a way of tuning the base oil and also established correlations that will help to guide the formulation of lubricants. 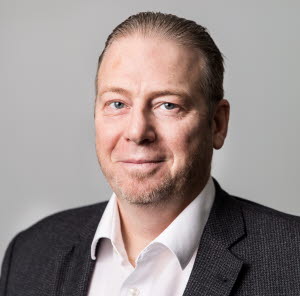