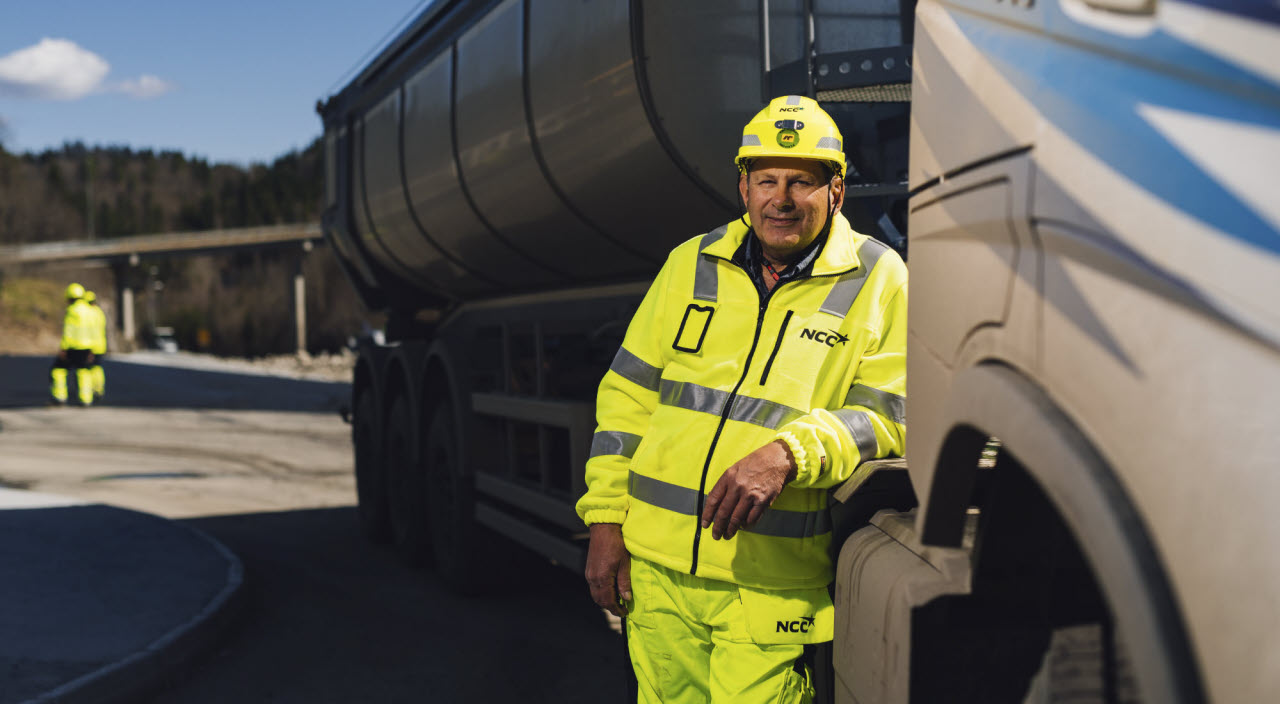 To achieve a faster, more costefficient work process for the expansion of the strategic road network, the Norwegian road authority created a separate organisation in 2015 known as Nye Veier (New Roads), with an investment budget of NOK 130 billion (EUR 13.5 billion).

The first project that Nye Veier has procured is a 23 kilometre section of motorway with access roads on the E18 between Arendal and Tvedestrand. The new section, which will be opening to traffic in October 2019, is an important element of a long-term project to build a four-lane motorway all the way from Oslo to Stavanger, a section covering around 555 km.

The main contractor for the project – which has a budget of just over NOK 3 billion (EUR 315 million) – is the contracting and industrial company the AF Group. For the surfacing work, the AF Group has in turn engaged NCC Industry.
“It’s our job to lay 300 000 tonnes of asphalt by next autumn,” says NCC’s District Manager Sigve Andersen. “This means that the project is probably the biggest Nordic asphalting assignment ever.”

In other words, there are a number of challenges facing Sigve Andersen and his colleagues, not least in producing such high volumes of asphalt during a relatively short period.

“In view of the tough winter, we’ve started a little bit later than planned. But then at the end of April the weather allows us to work at out and reach the goal of laying up to 150 000 tonnes between now and end of December, and the remaining volume during 2019.”

Another challenge is the logistics. It takes very precise planning to coordinate all the deliveries of aggregate and bitumen so that the right volume of asphalt is delivered to the workplace at the right time. Furthermore, some of the aggregate is arriving by boat, which is more difficult to plan than road transport operations.

“To facilitate the work, we’ve set up a mobile asphalt plant at the construction site,” continues Sigve Andersen. “It has the capacity to manufacture all the asphalt that’s needed, although if problems do arise we also have a stationary asphalt plant in Arendal.”

A third challenge is the environmental aspect. Nya Veier has specified strict requirements not only for environmental consideration, but also for health and safety.

“We’re taking quite a broad range of measures,” explains Sigve Andersen. “Our mobile asphalt plant is powered by gas and we’ll be using 40 000 tonnes of recycled asphalt, mainly in the base course, and also collecting aggregate locally for the binder course and the base course. We’ll also achieve a positive effect in terms of both energy consumption and climate impact by using low-temperature asphalt.”

“Nynas is supplying all the bitumen. One big advantage is that they’ve just started operations at their new PMB plant at the depot in Drammen. This means that we’ll have shorter, safer and eco-friendlier deliveries, as in the past we collected all the PMB from Gothenburg.”

In view of the intensive schedule, NCC will have to lay around 2 000 tonnes of asphalt each day. “We’ll be using two pavers with full mechanical control to make sure that the asphalt is laid to a high level of precision and also applying a 9.5 metre width for the wearing course,” concludes Sigve Andersen.