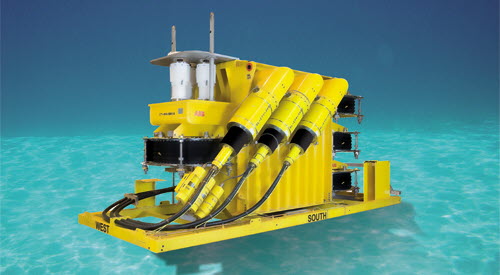 Subsea transformers convert electricity that operates powerful compressors, pumps and motors used in oil and gas production in deepwater areas such as the Mexican Gulf and the North Sea. Often several kilometres below the surface, these are among the harshest conditions on earth and require specialised equipment to overcome challenges like low temperatures, pressure, saltwater corrosion and overheating.

"There is enormous pressure at 3,000 metres and it is not possible to get down and make repairs if something is not working, so you need tough and reliable equipment," says Markus Winkler, Global Sales and Market Manager for small power transformers at ABB. "Our subsea transformers are made to work continuously under these high demands."

ABB is the first company in the world to produce subsea transformers, which help make reservoirs below the seabed more accessible and productive for longer. The most recent installations were born out of collaboration with oil giants Statoil and Shell, while the first subsea transformer was installed by robots off the coast of Africa for ExxonMobil back in 1999. There are now some 20 units in operation around the world.

One example is the recently built 60 tonne, 20 Megavolt Ampere transformer that is now being tested for supplying power to the Ormen Lange gas field 150 kilometres off the Norwegian coast. Operating about one kilometre down, it will feed power to compressors on the seabed to improve gas production at the field, which supplies 20 percent of the UK's natural gas needs.

Esa Virtanen, head of research at the Vaasa factory in Finland that manufactures the subsea transformers, says that ABB worked closely with Nynas' R&D department throughout development process to understand the changes the transformer oil would undergo at depth. ABB chose the company as a partner for this challenging application because of its long experience of top performing transformer oil products.

"We have known for a long time that the company can supply high quality insulating oils, and we know their properties," he notes.

The requirements of the insulating oil are more extensive for this application than a traditional transformer. Nynas' Nytro10 XN oil is a high-quality oil with low viscosity for maximum cooling effect and excellent low temperature properties. Outstanding oxidation stability gives a long life and high reliability, which is vital since maintenance is not an option and bringing equipment to the surface for repair is expensive.

"The insulating oil must also have a low expansion coefficient, as the transformer is housed in a solid tank that cannot expand," says Alper Akdag, ABB's Global Product Manager for small power transformers. Nytro10 XN fulfils this important requirement.

Although subsea transformers is a small niche market, which makes it difficult for ABB's competitors to fit such a product into their manufacturing, the company sees potential for future expansion in developing sectors such as offshore wind, wave and tidal power plants.