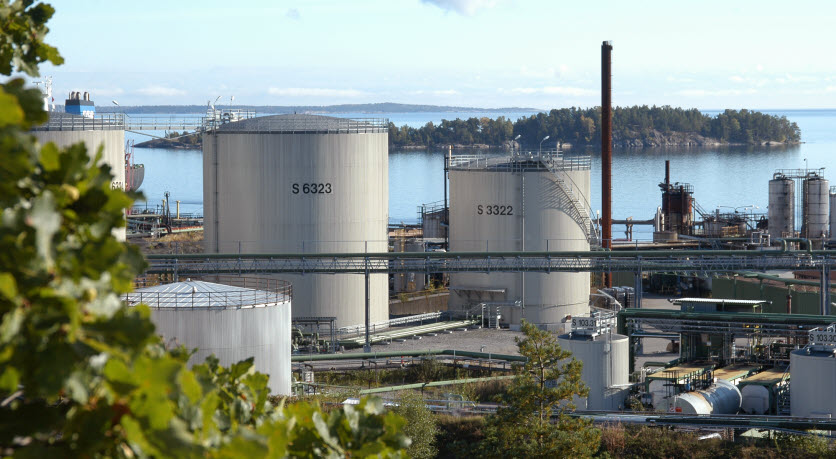 Thanks to a number of environment-oriented investments, it has been possible to reduce carbon dioxide emissions from the refinery in Nynäshamn by more than one hundred thousand tonnes a year.

Every year the refinery in Nynäshamn processes about one million tonnes of crude oil. Such a significant operation naturally has an impact on the environment. This includes, among other things, emissions of carbon dioxide CO2. Within the framework of the investments made – a total of two billion Swedish kronor over the last five-year period – the situation has been continuously improved.

The first major step was taken when a biofuel-fired cogeneration plant was opened in 2004. This plant, which supplies the refinery with steam, means that CO2 emissions in the region have been cut by around 100,000 tonnes a year. This includes reduced emissions from steam production as well as from the refinery's surplus heat, which is used in Nynäshamn's municipal district heating network.

Another example is the transition to natural gas as a feedstock for hydrogen production. AGA's terminal for liquefied natural gas (LNG) was completed in Nynäshamn in 2011. By replacing naphtha with natural gas to produce the hydrogen we need to manufacture transformer oils and other special products, CO2 emissions have been cut by around 20,000 tonnes a year.

But carbon dioxide is not only involved in production. It is at least as important to cut emissions when the finished products are used. With Nynas' binders, asphalt can be mixed and laid at a significantly lower temperature than usual. A temperature reduction of 40 degrees, for example, reduces CO2 emissions by 30%.

All in all, investments in recent years have laid a solid foundation for future work on cutting CO2 emissions, despite the fact that production is expected to increase at the same time.