“The method we used for creating stable semi-synthetic emulsions for this study shows how this can be done successfully. Essentially, what we have produced is a recipe book for translucent semi-synthetic metalworking emulsions,” says Thomas Norrby, professor and Senior Lubricants Specialist at Nynas.

“Several of the formulations had droplets measuring less than 0.1 μ, indicating that we had ended up with both “micro” and “nano” emulsions.”

Using two different methods and three different instruments, the researchers were able to study both the stability of the semi-synthetic emulsions as well as their relative sensitivity to water hardness. This enabled them to compare the performance of the different oils.

“Formulations made with NYNAS® T 22 base oil were particularly successful in terms of stability. Both the concentrate and the final emulsion are highly translucent. This offers a major benefit in that an almost clear metalworking fluid enables users to see the surface of the metal pieces they are working on,” says Thomas Norrby.

The results show how different chemistries for semi-synthetic metalworking emulsions can be used to optimise formulations for different regions and markets.

The emulsifiers used to produce the emulsion concentrates were based on formulations from Sasol Performance Chemicals. The researchers also collaborated with the specialty chemical company Clariant.

• Water-based metalworking fluids (MWFs) are generally sold as concentrates that are diluted with water by end-users. Three alternative types of concentrates are used. One type is based on conventional soluble oils, which is a mixture of oil and additives. Another one, the so called synthetic type, consists of water and additives in proportion 2:1.

• The third type of concentrates is semi-synthetic emulsions, made up of roughly equal parts of oil, water and additives. Semi-synthetic emulsions are increasingly popular as they have proved to be very stable over longer times, especially when dilution and top-up are made with demineralised (Demin) or Reverse Osmosis (RO) water, which significantly slows down the build-up of water hardness in the coolant system. 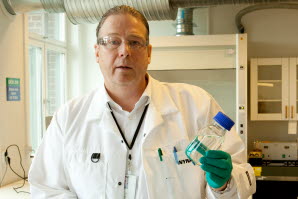